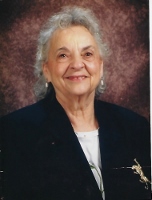 MILTON - Eileen "G.G." Moulton died on Thursday, April 5, 2018 surrounded by loving family in Milton.
She was born in Framingham, Mass. on December 24, 1923 the daughter of Doris and Alfred O'Tenti.
While attending Symmes Arlington School of Nursing, she met the love of her life Frederick Moulton. They soon married and spent 52 years together.
They moved from Massachusetts to Lebanon, Maine, and purchased a large farmhouse to raise their family. In the early 1960s she and Fred established The Academy Nursing Home in Rochester, purchasing a home there, and retiring 26 years later.
Eileen loved people, especially children. After Fred's death, she volunteered at the Strafford County Homeless Shelter, grandparents organization, and Tri-City Christian Academy. She enjoyed horse racing, card games, sewing, and, most importantly, helping her family.
She was predeceased by "her Fred," and sons Larry, Robert, and Richard.
She is survived by her brother, Kenneth O'Tenti; her children, Donna Moulton, Cheryl Monast, and Frederick Moulton Jr. and their families. G.G. will be greatly missed by her grandchildren, great grandchildren, and great-great grandchildren.
In lieu of flowers, memorial donations can be made to the Tri-City Christian Academy or Strafford County Homeless Shelter.