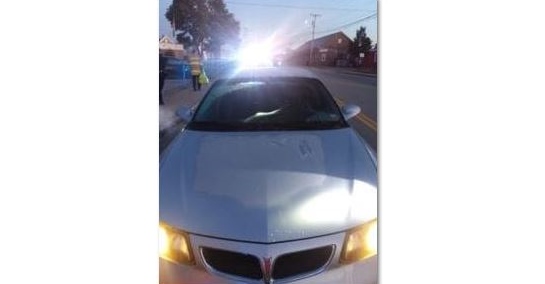 The Pontiac sustained no damage in the collision. (Rochester Police photo)

ROCHESTER - An elderly Rochester man was injured in a pedestrian accident on Columbus Avenue on Saturday morning.

The accident occurred around 6:22 a.m., a little more than 20 minutes before sunrise, when Lyn Fifield, 78, was attempting to cross Columbus Avenue in the area of the Elks Lodge.

Police found Fifield in the roadway. Preliminary investigation revealed he was attempting to cross Columbus Avenue from the northbound side when he was struck by a 2003 Pontiac Bonneville headed south.

Fifield was transported to Frisbie Memorial Hospital with what were described as minor nonlife threatening injuries. Police determined he wearing dark clothing and not in a crosswalk at the time of the collision.

The Pontiac, operated by Leo Mondou, 78, of Rochester, sustained no damage.

The accident is still under investigation at this time. Anyone with additional information is asked to contact Officer Aaron Garneau at the Rochester Police Department at 603-330-7128.