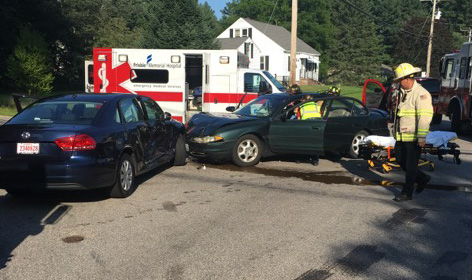 ROCHESTER - An elderly Rochester man sustained life-threatening injuries on Tuesday when his car collided with another vehicle on Old Dover Road.

The crash occurred around 5:20 p.m. at the intersection of Old Dover and Tebbetts roads when a 15-year-old juvenile with a learner's permit attempted to enter Old Dover Road from Tebbetts.

Police say the teenager was driving a Volkswagen Passat with his grandfather in the passenger seat and traveling eastbound when he stopped at the stop sign at the intersection and then proceeded to cross Old Dover Road.

As he did he crossed into the path of Albert Cohen, 84, of Rochester, who was traveling northbound on Old Dover Road in his 1998 Oldsmobile Intrigue. Cohen's vehicle struck the Passat on the passenger side, causing it to spin in a clockwise manner.

Cohen, who was not wearing a seat belt, was taken to Frisbie Memorial Hospital with what were described as life-threatening injuries.

A Frisbie spokesperson today said there was no one admitted to the hospital with that name, but said they could give no further information due to privacy laws.

Both the juvenile and his grandfather were uninjured in the collision. The air bags deployed in both vehicles.

Members of the Strafford County Regional Accident Reconstruction Team responded to the scene.

The Rochester Police Department is asking anyone who may have witnessed this collision to contact Officer Thomas Powers at 603-330-7128. This case remains under investigation.