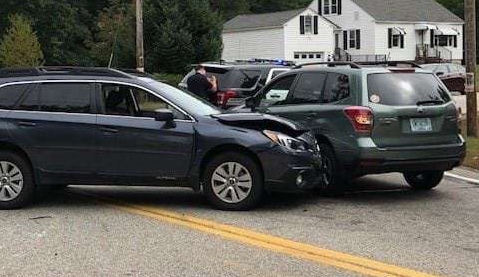 ROCHESTER - An elderly Rochester motorist was injured in an accident at the intersection of Old Dover and Tebbetts roads today.

The accident occurred around 11:15 a.m. when a 2006 Honda Accord driven by Mary Robinson, 80, of Rochester, was headed westbound and came to a stop then proceeded into the intersection of Old Dover Road. At that point she was struck by a 2017 Subaru Outback driven by Ashley Patstone, 25, of Rochester, who was traveling southbound on Old Dover Road.

Patstone's vehicle struck the passenger's side of the Honda and then came to a rest against a third vehicle, a 2015 Subaru Forester driven by Deborah Byers, 72, of Somersworth, which was stopped on Tebbetts Road facing eastbound.

Robinson was transported to Frisbie Memorial Hospital with what were described as nonlife threatening injuries.

The Accord and Outback were towed from the scene, while the Forester was able to leave on its own power.

The accident remains under investigation. Anyone who may have witnessed the accident is asked to call Officer Worthley at 603-330-7128.