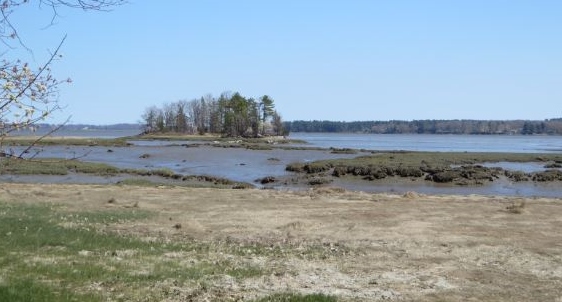 Reducing nitrates to the EPA's directive could be costly to cities and towns. Above, the Great Bay estuary. (Courtesy photo)

ROCHESTER - The city's Public Comments to the EPA's recently released Draft National Pollutant Discharge Elimination System order indicate it intends to fight compliance to an extremely costly and unwieldy requirement by the feds to greatly reduce nitrogen released into Great Bay, which serves as the watershed for about a dozen cities and towns from Farmington and Rochester and southward.

City Manager Blaine Cox said Rochester and most other towns in the watershed with the exception of Durham are also against the plan.

Cox said if Rochester were to accept the order in full it would double the city's sewer rates.

In their 44-page document, Rochester officials set forth a revealing summary of what they describe as EPA's "flawed scientific logic."

The resulting "arbitrary and capricious" decisions by the EPA, they say, consistently fail to follow the law of the Clean Water Act as well as EPA's own federal regulations, while "ignoring important aspects of the problems of the Great Bay Estuary, failing to consider important and relevant factors," and ultimately demonstrating "clear errors in judgment."

Rochester's comments expressly recognize "the absolute need to strive to improve and sustain the health of the Great Bay Estuary ecosystem," according to a city communique sent out on Tuesday.

Yet, they say the general permit allows the city no possible way to comply due to science and other applied factors EPA chose to use, while ignoring others. As the comments state: "The EPA cannot be allowed an 'unfettered license to disrupt entire communities and require compliance to murky, arbitrary, and unachievable standards,'" the bulletin reads.

"For the General Permit, the EPA relied on three 'dated studies of much smaller estuaries to impose a load rate for total nitrogen from New Hampshire communities of 100 kg/ha/year, translating into a 45% reduction in Total Nitrogen (TN) by the combined 13 affected NH communities,'" the bulletin said. "Using data readily available to the EPA, and methods used by the NH Department of Environmental Services (NHDES), Rochester's comments demonstrate that even if all towns were removed from the watershed and the area was void of human life - covered in only natural vegetation - there would be 'no basis to expect that [Rochester] could achieve the loading threshold of 100 kg/ha/yr" as required.'"

"It is not a matter of how to meet the standards," Cox said in the city bulletin on Tuesday. "The reality is that as the draft permit is written currently, there is no viable strategy for us to achieve the goals required within the permit."

If EPA's TN threshold is upheld, Rochester would be required to spend an estimated amount for Waste Water Treatment Facility improvements of between $12.9 and $14.2 million - including increased annual operations and maintenance expenses of between $840,000 and $980,000, the city says.

In addition, the EPA previously had informed the City that it will also have to treat total phosphorus (TP) to reduce its WWTF discharge. The cost for the TP upgrades is estimated at $15.6 million, with an additional $260,000 per year for operations and maintenance. Rochester already has up to $40 million of planned upgrades to the system for fiscal year 2020 through 2024 - estimated at an additional $4 per unit increase in fees, equaling a rate of $10.75 per unit by 2024.

The city's Finance Department has estimated that the direct cost impact on ratepayers for the TN and TP upgrades would be an additional $5 per unit -raising the rate ultimately to $15.75.

Besides additional errors in EPA calculations and unsound scientific studies found by Rochester's team of experts and consultants, the claim by EPA that it used certain "adaptive management" approaches to the Draft General Permit is false, the comments state. In fact, no adaptive management measures are included or set forth in the permit.

While Rochester's comments highlight the critical need for a healthy, resilient Great Bay Estuary ecosystem, city officials say they have become aware of well-intentioned groups relying on exaggerated and unsubstantiated claims to motivate citizens to distrust their efforts. Some groups such as the Conservation Law Foundation (CLF) have publicly questioned the motives of the municipalities in the region, accusing them of "poking fun at the science" and using "the same tired old statements." CLF, however, fails to present any scientific data to back up their claims.

The comments affirm that the city will continue to push for sound scientific basis and the ability to work towards achievable goals using sustainable methods. Rochester officials stress that the goal of a healthy Great Bay ecosystem should not be an "us vs. them" exercise. "You can't choose between the welfare of the people you serve, and the well-being of a vital watershed," Cox said. "It must be both: the health and well-being of the bay and the same for the people who rely on it. That, to us is sound environmentalism, best practice and good governance."

Cox said that the ball "is now in the EPA's court, because by law, they have to respond to every single issue brought forth in public comment.

He said if they push forward with no easing of the permit's directives, the city would mull legal action.

The court battle would play out in federal court in Concord, Cox said.