Ernie Belleville ... grew up in Rochester 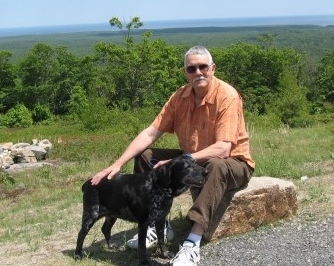 BARRINGTON - Ernie Belleville (L. Ernest, Jr.) began his journey over the rainbow bridge to be reunited with his cherished dogs on Thursday, July 9, 2020, following a brief illness which he met with dignity and courage.
Ernie was born in Rochester on Nov. 24, 1945 to the late L. Ernest Belleville, Sr. and Juliette Letourneau, the youngest of four children. He spent the majority of his childhood in East Rochester, graduating from Spaulding High School in 1963. He then obtained a degree in mechanical drafting from the N.H. Vocational/Technical Institute in Stratham.
After working as a design draftsman for Kidder Press and Davidson/Textron for a number of years, Ernie founded and operated his own successful design consulting business until his retirement in 2012. Following his retirement, he and his wife donated a conservation easement of several acres of their property to be held in perpetuity as an undeveloped area for the benefit of the many creatures that have made their home there, as the destruction of natural wildlife habitat for profit was always of great concern and sadness for him.
Ernie delighted in many pursuits, including but not limited to hunting and fishing in his earlier years, woodworking, country dancing, woods walking with his dogs and taking day trips to visit as many historical and interesting New Hampshire sites as he could talk his family and friends into. History, especially the civil and revolutionary wars, was his specialty, and his knowledge was vast and phenomenally accurate. To ask a historical question of Ernie was to sign up for a lecture on the finer points of the subject addressed. He also enjoyed long touring auto rides on back woods roads where he would claim to be "lost," but he always found his way out and home.
Ernie enjoyed a special and very close relationship with his beloved grandson, Tristan, and they spent many hours together that were not stopped during his final illness and which provided great comfort to him.
Ernie is survived by his wife of 54 years, Nancy (Mazur) Belleville; his dear grandson, Tristan A. Goodwin of Northwood; his sister, Janet McKenna of Barrington; sister-in-law, Patricia Belleville of Somersworth; brother-in-law, Ron Dupuis, Sr. of Farmington; and nieces and nephews, Jason McKenna, Melanie Morrisette, Michael McKenna, John McKenna, Ron Dupuis, Jr., Mark Dupuis, Kathleen Gagnon and Susan Hope.
In addition to his parents, he was predeceased by his daughter, Debra Goodwin, his brother, Leo Belleville, and his sister, Irene Dupuis.