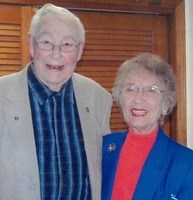 SOMERSWORTH - Esther Drew Eastman died on March 22, 2021 at the age of 98. She was born on January 30, 1923 in Union, to Lyle and Harriet Locke Drew.
She graduated from Spaulding High School in Rochester, as the valedictorian in 1941 and from UNH in 1945. She was in the first class of Occupational Therapy students.
Esther worked at McLean Hospital in Waverly, Mass., for two years. She then became the O.T. Director at McCosker Hirschfield Cardiac Home in Hillburn, N.Y. until she was invited back to UNH as head of the O.T. Department.
Four years later she and David Eastman were married and moved to Somersworth, where he had his medical practice. They raised their two children.
Esther was the Welcome Wagon hostess in Somersworth for 20 years. She and David taught water aerobics and chair aerobics at the Works Health and Fitness Center in Somersworth for 24 years.
She was a member of the Women's Club of Somersworth and a member of the First Parish Church, both for over 50 years. She was the secretary of her UNH class for a number of years.
Together, she and David received the Lifetime Achievement Award for activities they contributed to in Somersworth and the surrounding area.
Esther was predeceased by her parents, her brother, Lt. Ernest Drew who died in WWII, her husband, David G. Eastman, their son, D. Alan Eastman and his wife Patricia Eastman.
She leaves her daughter: Susan Eastman of Somersworth, her grandchildren: Jennifer Nolan of Salem; Rebecca Eastman of Oklahoma City, Okla.; and Sara Eastman Rush of Greensboro, N.C.; her great-grandchildren: Ellen and Kelly Nolan of Salem, and Abigail Rush of Greensboro. There are also several nieces, nephews and cousins.