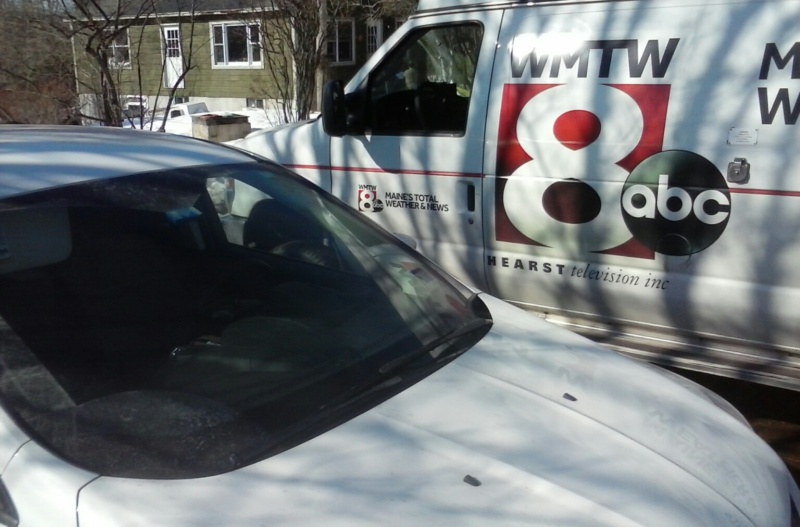 TV crews and other media pack the driveway of 1097 Milton Mills Road in Acton on Thursday afternoon. (Lebanon Voice photo)

ACTON - The mother of an Acton man allegedly stabbed to death by his estranged wife on Wednesday said she brought the couple's two children to his home to watch their father die.

"She had primary custody until she was served papers yesterday," said Gay Weyland today. "She didn't bring them for a visit; she brought them to watch what she did."

Scott Weyland, 43, who had recently moved in to live with his mom at 1097 Milton Mills Road, died upon arrival at Southern Maine Medical Center in Sanford shortly after the assault.

Police have not confirmed the manner of death, only saying Scott Weyland was killed on the property.

An autopsy conducted on Thursday was expected to reveal more details of his death.

The suspect, Kandee Weyland, 46, stands charged in her ex-husband's death as well as violating a protection order. She is being held at York County Jail and was expected to be arraigned today or tomorrow in York County Superior Court.

Gay Weyland said the couple's divorce had just been made final on Friday, but that Kandee Weyland had objected to an amendment that would have enabled them to contact each other on behalf of their children's welfare.

"She objected because she didn't undertand it, I guess, and so we had another court date for March 6 so they could amend it," Gay Weyland said. "But out lawyer, knowing that the children were in crisis, had gone down and filed a petition for full custody to try to hurry that up so we could get custody. She (Kandee Weyland) received that (order) in yesterday's mail before she flew over here."

Gay Weyland said her son had watched his father die in a tragic accident when he was three and wanted nothing more than to be a good father for his kids.

"We've been fighting for 10 months to get those kids to a safe place," she said tearfully as she talked to reporters on her back stoop.

The two children are currently staying with relatives.