Evan Liberty, his resentencing delayed, waits for justice inside a federal prison 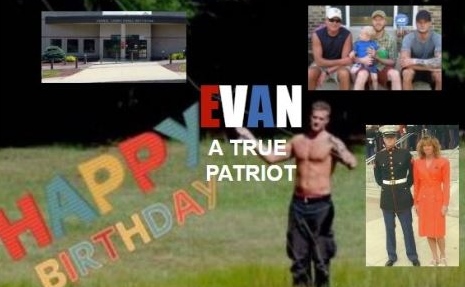 Evan Liberty in happier times practicing his fly fishing technique at his parents' Rochester home, plus clockwise from upper left, his prison in Pennsylvania, with his father, brother and nephew and with his mom at a Marine ceremony. (Courtesy photos)

U.S. District Court officials in Washington announced on Thursday that the resentencing of a Rochester man and two other Blackwater guards convicted in the so-called Nisour Square massacre of 2007 has been postponed.

Evan Liberty of Rochester, whose birthday is today, remains imprisoned on a 30-year mandatory guns sentence, but that sentence was tossed two years ago by an appellate court as "cruel and unusual" punishment.

Dustin L. Heard and Paul A. Slough are the other two given 30-year gun sentences who were to have had their resentencing along with Liberty on Aug. 14.

A fourth Blackwater guard, Nicholas A. Slatten, who was convicted of murder, will still have his sentencing that day.

Washington Attorney Bill Coffield, who has been on Liberty's defense team since the beginning, told The Rochester Voice on Friday that logistical problems with transportation of the four men - who are in various federal facilities across the country - likely led to the postponement.

"U.S. Marshals are in charge of transportation and it's likely they asked for more time and the court went ahead and gave it to them," Coffield said. "It's simply logistics."

Coffield said he expects they'll get a new rescheduling date next week and that it will likely be for some time in September.

As far as the resentencing, itself, Coffield said he's not exactly sure how it will play out.

He said he expects the prosecution and the defense will be in court in the next few weeks deciding on who should be able to speak. Coffield said it was unclear whether either victim statements or those defending the three men will be allowed.

"This is a resentencing, but it's a little bit of hybrid," he said, adding he didn't expect arguments heard during the last sentencing to be repeated.

"We may go back and forth with the government and court to find out what they're expecting," he said.

Coffield said he knew a number of people wanted to speak on Liberty's behalf, but couldn't confirm whether they would be able to or not.

The only ones known to be speaking include the three defendants, he said.

Regarding what might come out of the sentencing, Coffield said only that the judge has "wide latitude" in such matters.

"We're hoping for the best for our clients, and we're going to put the best case forward," he added.

Liberty and three other Blackwater guards from his Raven 23 unit were sentenced for their alleged part in the Nisour Square incident of Sept. 16, 2007, in which 14 Iraqis died after Liberty's Blackwater Raven 23 tactical team opened fire on civilians, government lawyers said.

However, Liberty, Slough, Heard and Slatten said they fired their weapons after coming under attack by insurgents dressed as Iraqi policeman.

The government's prosecution of this case was historically prejudicial and twisted, so much so that they hid exculpatory evidence during the trial.

An appeals court two years ago vacated the guilty verdicts of all four men.

Slatten's earlier verdict was tossed because it was found the prosecution deliberately hid evidence that could have cleared Slatten.

However, in a later trial, Slatten was found guilty again. His resentencing is still set for Aug. 14.

Meanwhile, today is Evan's birthday. It will be his fourth year spending it inside a federal prison in Pennsylvania.

Evan was sentenced to a mandatory 30-year sentence for using an automatic weapon even though those weapons had been distributed to him by the Department of State.

To show your support for Evan Liberty readers can do the following.

First, write President Trump. Mail it to the White House through this government portal. A letter suggested by the group "Free Raven 23" is below.

I am writing on behalf of four decorated veterans who need your help. These men--Dustin Heard, Evan Liberty, Nick Slatten, and Paul Slough--went to war for our country and served deployments to some of the world's most dangerous regions. Then, after their tours were over, they went back into harm's way as contractors supporting the Department of State's mission to bring democracy to Iraq.

In 2007, while working under Blackwater's contract with the State Department, they came under fire and faced a car bomb threat in a Baghdad war zone. They used the force necessary to do their jobs and come home to their families, only to find themselves convenient targets of a political witch hunt. For nearly eleven years, they have been fighting their way through a civilian justice system that has failed at every turn.

As a result of numerous rights violations during the legal proceedings, one of these men (Nick) is scheduled to be retried (by a second civilian jury) in June 2018. The other three men (Dustin, Evan, and Paul) will be resentenced sometime after that.

I ask that you look into their case. These are good, honorable men who, under stronger leadership, would still be fighting for this country, not against its government. What has passed for justice so far in their case is anything but, and it is time that is recognized through a presidential pardon.

Second, contact your Congressional delegation and tell them to get on the bandwagon to free Evan once and for all.

But don't abbreviate anything or your mail won't make it!

Below are just a few of the many stories The Rochester Voice has published to put a spotlight on this disturbing story and the wrongful imprisonment of a hometown hero. We urge you to read them, go to supportraven23.com and research this on your own. Only through education, determination and persistence can we right a wrong that should never have been made.