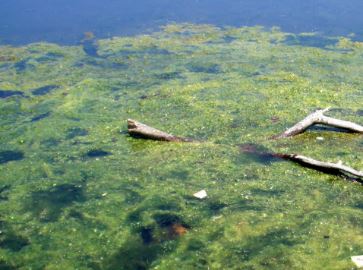 MILTON - While swimming is still allowed at Milton's Town Beach an attendant there said few were going in the water today after a cyanobacteria advisory was issued by the state's Department of Environmental Services last week.

Toxins in these blooms can cause swimmers and waders to get sick and have even been linked in some studies, including one on a New Hampshire lake, to life-threatening afflictions such as amyotrophic lateral sclerosis, or ALS, also known as Lou Gehrig's disease.

Health officials urge people to avoid the algal blooms, which appear as areas of water that are greenish speckled on the surface.

Milton Town Beach tested positive for cyanobacteria toxins on June 16, with a resample rescheduled for June 24. Results of that test should be available for the weekend, Milton Rec Director Karen Brown said on Tuesday.

A cyanobacteria bloom may produce very little or no toxin in one lake and a later bloom in the same lake could produce a large toxin concentration, according to the state DES.

The blooms could also be in Depot or Northeast ponds, so swimmers in all Milton Three Ponds should be vigilant.

These cyanotoxins target the liver, kidney, the central nervous system, and skin irritants, according to the DES. All cyanotoxins can cause both acute and chronic illnesses. Acute effects, such as skin and mucous membrane irritations, can occur after short-term exposure with water containing these toxins. Chronic effects, such as liver, kidney, and central nervous system damage, can occur over a long period of time from water ingestion containing toxins.

Brown said on Tuesday that with all the wind, the risk could have passed, and that a bloom can be present for 10 minutes and then gone.

"We're just telling people be aware," Brown said. "If you see something green in the water, avoid it."

Brown said information about cyanobacteria has been posted on the town website and at the beach.

Part of the warning on the sign reads, "High levels of potentially toxic cyanobacteia have been identified in this water. WATER CURRENTLY NOT SUITABLE FOR WADING OR SWIMMING!"

Cyanobacteria can be caused by fecal material like dog droppings leaching into the lake from shore, as well as many fertilizers or even septic system failures near the shoreline.