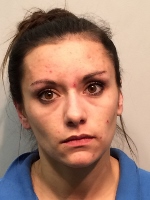 CONCORD - The U.S. Attorneys Office announced today that Nicole Perry, 22, of Berwick, Maine, formerly of Felker Drive, Milton, pleaded guilty in federal court to one count of possession of fentanyl with intent to distribute.

According to court documents and statements made in court, on Dec, 20, members of the Strafford County Drug Task Force conducted surveillance on a vehicle in which Perry was a passenger, as it traveled from Gonic to Lawrence, Mass.

As the car returned to New Hampshire, law enforcement officers conducted a motor vehicle stop on Route 16, just beyond the Dover tolls. Perry admitted that she had purchased drugs, which were concealed in her clothing. A subsequent search revealed that Perry was in possession of approximately 116 grams of fentanyl.

Perry will be sentenced on Jan. 3.

"The United States Attorney's Office continues to partner with our state and local law enforcement colleagues to target those who are distributing fentanyl," said Acting U.S. Attorney John J. Farley. "I commend the law enforcement officers for their work in this case. Their efforts prevented a substantial amount of this deadly drug from being distributed."

The investigation was conducted by the Strafford County Drug Task Force, including officers from the police departments of Dover and Rochester, the Strafford County Sheriff's Department, and the New Hampshire State Police. The case is being prosecuted by Assistant United States Attorneys John Davis and Shane B. Kelbley.