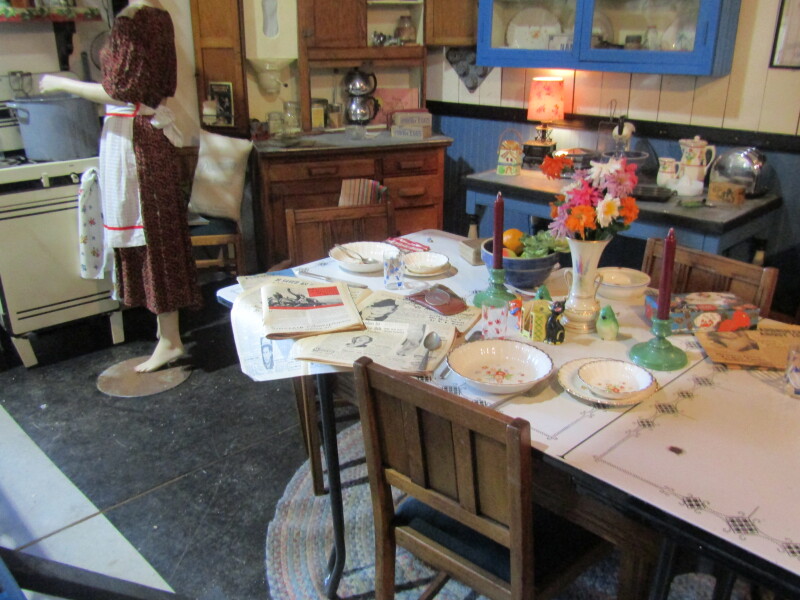 COOKIN WITH GAS: The exhibit shows a woman toiling over a gas stove. On table, back right, a 1930s iteration of a table mixer and waffle iron. (Rochester Voice photo)

ROCHESTER - Most kids today would think that if you went back almost 100 years daily living must have been pretty primitive, but an exhibit in the Granite State Fair museum shows many of the same conveniences we have today were available then. They just didn't look the same.

Museum Director and Arts Superintendent Josh Wiggin curated the exhibit that depicts the typical 1930s kitchen of most Americans.

Among the interesting relics of past kitchen technology are 1930-era appliances, including an electric ringer washing machine, a gas stove and electric mixer and waffle maker.

He said by then many American kitchens had also transitioned to electric refrigerators from the older ice boxes.

"People think kitchen technology was pretty primitive back then, but it was pretty modern," Wiggin said last week as he gave a tour of the kitchen for fairgoers.

Wiggin said one thing absent from today's kitchens was the presence of those expansive countertops, with housewives relying more on free standing wooden tables to to their culinary prep work.

He also said most kitchens in the 1930s featured a resident canary or parakeet.

"Most housewives spent all day in this room so the needed some company," he quipped.