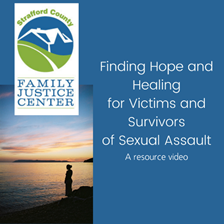 ROCHESTER - The Strafford County Family Justice Center announced on Thursday it had released its grant funded resource video for survivors and victims of sexual assault on its website and social media accounts.

The video outlines some of the events that could take place after someone has been sexually assaulted or abused and helps clarify a potentially confusing and often retraumatizing process.

Strafford County prosecution, law enforcement and advocates have worked incredibly hard to increase support for victims of domestic violence and sexual assault from the being the first county in the state to centralize misdemeanor domestic violence prosecution to the opening of the Family Justice Center in 2012.

After recognizing the barriers that survivors and victims often must face after experiencing the trauma of assault and abuse, stakeholders identified that removing those barriers and coming together to provide resources, collectively, was a model that not only benefited the survivor but was also fiscally responsible.

One of the SCFJC's most successful partnerships is the one between law enforcement and social services like HAVEN. A crucial advancement in New Hamphsire's response to domestic and sexual violence has been for officers to identify potentially lethal domestic violence situations and to connect victims to confidential advocacy at the scene. This partnership strengthens law enforcement's handling of domestic violence and sexual assault calls as well as informing and educating the advocate's interaction with survivors.

In the wake of COVID 19 and the major constraints on the economy, staff and advocates are increasingly concerned that the shadow pandemic of domestic and sexual violence will continue to harm our most vulnerable while facing cuts to necessary services in the community.

The SCFJC put forth that they believe the family justice center model can be strengthened and replicated across the state so to prioritize the needs of sex assault survivors and their families while also working to reduce unnecessary costs to the community and victims.