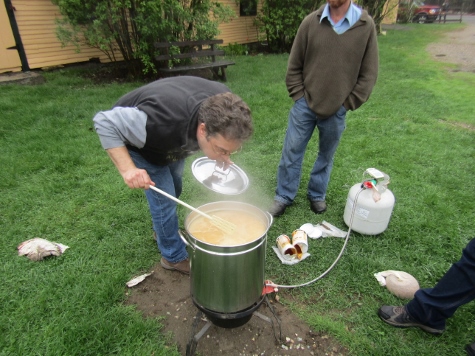 Jim Hicks sniffs at a vat full of wort as he conducts a beer making class at the New Hampshire Farm Museum on Saturday. (©Lebanon Voice photo)

"It never gets old," Hicks said on Saturday while teaching a sort of home brewing 101 to attendees at a New Hampshire Farm Museum event.

Under a dreary, gray sky, a single propane-fired vat fizzed and cooked up a couple of gallons of "wort," which is basically beer before it becomes beer.

"What we're doing with the wort is making a happy home for the yeast," Hicks said, the first step in the beer making process.

It starts with fermentables in which you mix water and malt. After the sugars are extracted, it is the color and consistency of honey.

Hicks, who lives in New Durham, said by controlling how much malt you put in it, you can control how light or dark you want your brew.

Then you add the hops and boil for an hour.

"There's a lot of steps in making beer and a lot of waiting," he joked. "And to make good beer you should be drinking beer while you're waiting. Actually, it should be your own beer you've already made."

After an hour boiling on the flame you let the brew cool down to about 80 degrees and add the yeast, he said.

At this point it is placed into a fermentation container like a carboy.

Hicks said this is when the beer starts to become beer.

As the yeast reproduce and eat, they break sugars into byproducts CO2 and alcohol.

The CO2 evaporates as bubbles, leaving the alcohol behind.

Hicks said then you let it ferment a week or two and then bottle or keg it.

But you're still not done. You have to carbonate your beer to your liking, which Hicks does using a CO2 tank.

All in all it's usually about 40 days from brewing to enjoying the brew, he added.

"I started out with kits," Hicks said. "Everybody does, but now I have a big operation at my house."

Hicks said the greatest thing about brewing your own beer is you are in full control on how dark it is, how bitter or sweet it is, even the alcohol content.

What is Hicks' favorite store bought beer to emulate and improve upon?

"I like a straight-up IPA with about 6.5 percent alcohol, like a Smuttynose Finest Kind or a Dogfish Head," he said.

And not to be forgotten, you can save a lot of money by making your own custom beer. Hicks said a good microbrew usually goes for around $14 a 12-pack, but he can home brew the amount of beer equal to five 12-packs for about $26.

Between the money you save and the control over your brew, plus the pride in being a home brewer, Hicks said there's a lot to savor.