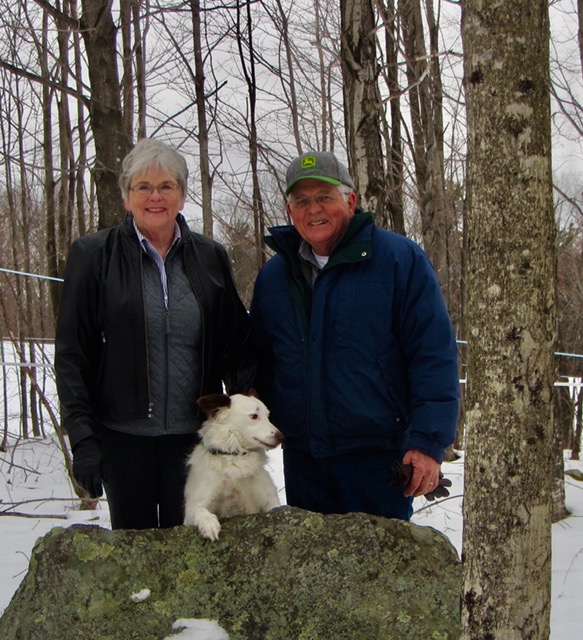 Bob and Debbie Leary at their Farmington property. (MMRG/Courtesy photo)

FARMINGTON - Bob and Debbie Leary of Farmington have placed an additional 63 acres of the Leary Farm under conservation easement, expanding the area of their conserved forests and fields to a total of 140 acres.

Local land trust Moose Mountains Regional Greenways collaborated with the landowners to complete the project and now holds the easement on the 63-acre portion. The project was completed with grants from the Agricultural Land Easements program of the NH Natural Resources Conservation Service, the NH Land and Community Heritage Investment Program, the NH State Conservation Committee (Moose Plate), the Farmington Conservation Commission, the Leary family and private donors.

Bob Leary loves to tell the story of his family's farm and will pull out a map on which he has outlined the different parcels to illustrate its history. Bob's grandfather initially acquired 100 acres for subsistence farming and sugaring in 1927. Bob's father, a dairy farmer by trade, purchased his father's farm and two adjoining farms with better fields for growing hay and corn to feed his cattle. As a teenager, Bob helped his father and older brother in the family dairy business when it was 'retailing 400 quarts per day', but left it behind to become a civil engineer. He and Debbie always loved to visit and they moved back in 2005, fulfilling their dream to build a retirement home on a high corner of the family land.

Although the dairy farm is no longer in operation, the Leary's continue to maintain the agricultural value of their land through active management and soil improvement. On the map, Bob points to the hay fields that he has been stewarding for the last decade and a half, a long list of tasks that includes testing the soil, applying soil amendments to maintain soil health, cutting and baling hay, and fighting invasive species.

To do otherwise seems unthinkable to him, however. He likes to quote Sue Knight of NRCS, who once told him, "One hundred years from now, people will need a place to grow food."

Debbie is equally attached to the land. She collects sap and manages the website for their 'Forty-to-One' maple sugar business (the name was her idea) and gets local kids to pull out the invasive milkweed. She loves to walk their land, enjoying the views and the plentiful wildlife. Four years ago, she had a memorable experience that she still loves to recount: a fisher streaked across her path, darted up a tree, and clung there looking at her and chittering. "I talked to him for 10 minutes, until I finally decided to keep walking," she says.

In addition to fisher, the Leary's woodlands support roaming bear, bobcat, and moose, all of which they have captured on camera. The fields provide important habitat for grassland-loving species, many of which have been declining in NH in recent years. Bob loves to watch a bird of prey called a Northern Harrier as it soars low over the field to hunt. MMRG's birdwatching group came to watch the breeding Bobolinks that liven the hayfield in June with their unmistakable bubbly song and fluttering flight. The new conservation easement preserves these wildlife habitats, prime farmland soils, several historic sites, and public access to a couple of miles of woods roads for non-motorized, low-impact recreation and hunting.

Of primary importance to Bob is that the conservation easement preserves the land that his father and older brother cared for their whole lives. He explains, "Dad used to say he could stand it if this land grew up to bushes, but would hate to see it grow houses." Debbie adds, "[Bob's] Mom was proud of what we were doing - working to preserve the land. And our son and daughter are absolutely supportive of it. They love to visit, to help with sugaring and go turkey hunting, which they will still be able to do." Underlying his loyalty to family and his conscientious reasons to conserve the property, Bob has an emotional connection to the land, revealed when he exclaims "I love this place. I always have," adding, "And I'll talk to anyone about it anytime!"