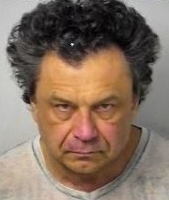 CONCORD - The Farmington man whom the state of New Hampshire has declared a "known drug dealer" and whose home was the site of a grisly double murder in 2017 was sentenced to three and a half years in federal prison on Tuesday for participating in a meth trafficking conspiracy.

According to court documents and statements made in court, on June 25, 2018, the DEA received information that Dean Smoronk, 58, formerly of Meaderboro Road, planned to have methamphetamine shipped from California to Lebanon, Maine.

Following that revelation DEA received information on July 10, 2018, that the shipment was underway. The DEA contacted the U.S. Postal Inspection Service, who located the USPS package in transit to Lebanon. Meanwhile, the USPIS determined that the return label listed a return address in Antioch, Calif.

The USPIS seized the package prior to delivery and transported it to New Hampshire. A New Hampshire State Police narcotics detection canine alerted to the presence of narcotics in the package, and a search of the package resulted in the seizure of 67.8 grams of "ice" methamphetamine.

Investigators determined that Laurel Bennett, who resides in California, conspired with Smoronk to send Smoronk the methamphetamine package. Between June 16, 2018, and July 10, 2018, Smoronk and Bennett exchanged text messages about the shipment approximately 27 times.

Bennett pleaded guilty to the conspiracy charge and is awaiting sentencing.

"Methamphetamine is a dangerous drug that is appearing with disturbing frequency in New Hampshire," said U.S. Attorney Murray. "As this case demonstrates, local traffickers are working with West Coast suppliers to make it available for sale here. In order to stop this dangerous and illegal trade, we will closely coordinate with all of our law enforcement partners to identify, arrest, prosecute, and incarcerate those responsible."

"As methamphetamine seizures by law enforcement are on the rise, DEA stands committed to keeping this highly addictive drug off the streets of New Hampshire," said DEA Special Agent in Charge Brian D. Boyle. "This investigation demonstrates the strength of collaborative law enforcement efforts in the Granite State."

Smoronk, whose 979 Meaderboro Road home was the site of a double murder in January 2017, was indicted in the meth trafficking case on Jan. 9.

Killed in the double stabbing deaths were Smoronk's longtime girlfriend, Christine Sullivan, 48; and an acquaintance of hers, Jenna Pellegrini, 32, of Barrington, who were both killed early the morning of Jan. 27, 2017, police say.

Smoronk has never been implicated in the murders.

Meanwhile, Timothy Verrill, 36, of Dover, the man accused in the deaths of Sullivan and Pellegrini and a longtime Smoronk acquaintance, is expected to have his second murder trial next year after his trial this fall ended in a mistrial over discover issues.