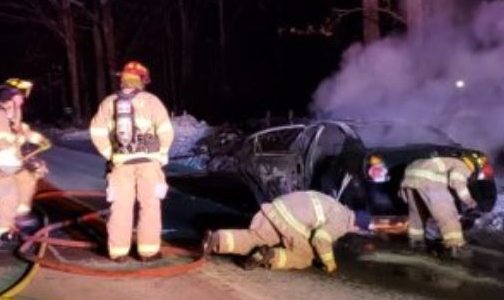 ROCHESTER - A Farmington man was arrested for his second DWI offense Thursday after police were called to the scene of his burning car on Salmon Falls Road where they found no immediate evidence that the vehicle had been in a crash.

Police and fire responded around 10:55 p.m. to the area of Salmon Falls Road between Whitehall Road and Portland Street and found a Nissan Altima fully engulfed.

While firefighters quickly extinguished the blaze, officers located a male in the area who was ultimately determined to be the owner and operator of the vehicle.

The cause of the fire was unable to be determined, but as a result of the investigation, Jason Chapman, 39, was arrested and charged with driving after suspension and DWI 2nd Offense, both Class A misdemeanors.

No injuries were reported by police.

It is unknown if the vehicle was involved in a collision prior to the fire, police said.

The case is still under investigation at this time; anyone with information about this incident is asked to contact the Rochester Police Department at 603-330-7128.