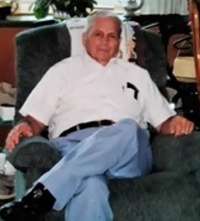 He worked for the U.S. Postal Service for many years and became postmaster in Strafford before he retired. He then went on to work at both Sears & Lowes in Concord.

He won numerous ribbons/awards for his vegetables at both the Deerfield and Rochester fairs. He was a generous man who gave away fruits from his own trees and vegetables to all of his neighbors. He could be seen mowing his six-acre property which he kept neat and tidy. He resided in Strafford for almost 20 years.

He is survived by his daughter, Vicki Hoffmann of Strafford who served as his caregiver for the past 3 ½ years as well as his son Luke Paugh of Exeter. He has two grandsons, Josh Larsen of Derry and Daniel Larsen of Claremont. He also has one brother Floyd and wife Edna who reside in Ohio. His wife Ruth preceded him in death in August 2018.