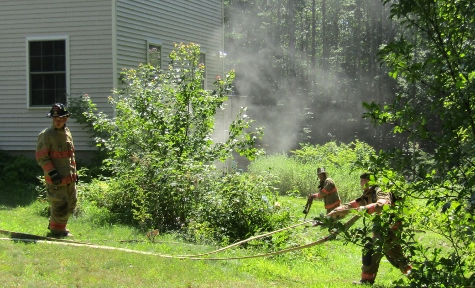 Firefighters stretch a hose from the street to behind a New Bridge Road house during a basement fire on Thursday. (Rochester Voice photos)

WEST LEBANON - Firefighters battled toxic fumes and dangerous heat on Thursday while putting out a basement fire at a home on New Bridge Road.

Firefighters were called to the blaze around 2 p.m. after a Milton man and his grandson had arrived at the house to go swimming and upon arriving heard alarms sounding from inside the house.

The grandson then noticed smoke coming from a side of the building and called 911.

When Milton and Lebanon firefighters arrived at 128 New Bridge Road they found smoke coming from the basement and flame inside. Due to the possibility of toxic fumes firefighters - working in full gear in near 90-degree heat - donned oxygen masks before entering the house.

Lebanon Fire and EMS Chief Dan Meehan said fire damage was confined to the basement. He said no official cause had been determined, but that the fire was in the area of an outdoor patio heater. He also confirmed dangerous fumes were present inside.

Once firefighters had stretched a hose to the back of the two-story house and poured water on the flame, smoke billowed through the entire structure and a couple of firefighters went through the house opening windows to speed its ventilation of the smoke.

No civilians or firefighters were reported injured.