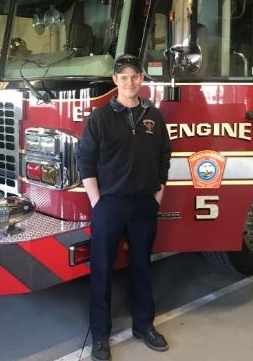 ROCHESTER - City Manager Daniel Fitzpatrick and Fire Chief Mark Klose announced on Tuesday that Firefighter Matt Furtney has been named the City of Rochester's Employee of the Year for 2017.

Firefighter Furtney earned the recognition for his immense dedication to protecting the safety and welfare of Rochester's residents throughout the year. He will be officially recognized at Employee Recognition Night on Friday, March 16, at the Elks Club.

In June, he spearheaded an effort by several Rochester firefighters to build a wheelchair ramp for an East Rochester resident, helping to make his home more accessible.

Additionally, in July, Furtney showed extraordinary courage when he rescued a man at risk of drowning in the Cocheco River. First responders initially could not locate the man in the open water, but Furtney was determined and initiated a search through dense brush and swampland. He was eventually able to locate the victim with a flashlight, allowing crews to reach him and pull him to safety.

"Matt sets an extraordinary example for our entire department of what it means to be a firefighter, and I'm proud of him for earning this honor," Klose said. "He's someone that all of our firefighters look up to, and his commitment to excellence in service to the people of Rochester is something that we all admire."

Rochester's Employee Recognition and Achievement Team selected Furtney from a group of finalists that also included Firefighter Kaitlin Taatjes, who earned an honorable mention for her work in 2017.

"I want to congratulate Firefighter Furtney for earning this award, which represents his extraordinary contributions to the fire department and the city throughout 2017," Fitzpatrick said. "He distinguished himself with his courage and willingness to go above and beyond the call of duty, and this honor is well deserved."

Furtney has been with the Rochester Fire Department since 2014. He was named the city's Employee of the Month in September of 2017, and was nominated by Capt. Mark Avery.