For Ariel Waddell of Augusta, being a 'carny' is just 'ducky' 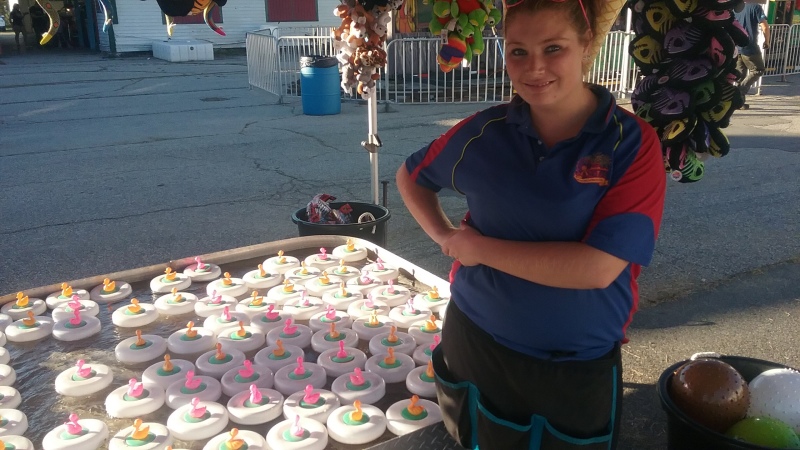 Ariel Waddell waits with a smile for her next 'Duck Pond' customer at the Rochester Fair. (Rochester Voice photos)

ROCHESTER - Far from the madding crowd of frenzied midway game hawkers down by the grandstand Ariel Waddell quietly works her "Duck Pond" at the other end of the fairgrounds near Lafayette Street.

You see, the "Duck Pond" is designed for youngsters who would run crying to their mom's arms if anyone was to try to goad them into playing, so Waddell gets to work a game as quiet as, well, ducks bobbing in a duck pond.

"I love working this game" she says. "I love little kids, so it's really fun."

Waddell, who is from Augusta, Maine, said she just joined Fiesta Shows, the carnival running the midway games and rides for the Rochester Fair, in July.

"I got tired of my old job, so I asked my aunt who was already working for the carnival if she could get me a job," she said. "And they said sure."

She said her first work was at a fair in Skowhegan, Maine, before working her second fair here in Rochester.

Kids win prizes at the "Duck Pond" by choosing two ducks, which have prize designations on their bottom.

After they choose them, they get to pick them out of the water and see what they won.

The nice thing about kids? Whatever they win, they absolutely love it!

Waddell said while she's with Fiesta Shows she lives quite comfortably in her aunt's travel trailer.

After the Rochester Fair gets over later today she said she'll probably take a week off and go back to Augusta before joining back up during the Topsfield (Mass.) Fair on Sept. 28.

Unlike most jobs, she can pretty much join up whenever and leave whenever, which is kind of what being a carny is all about.