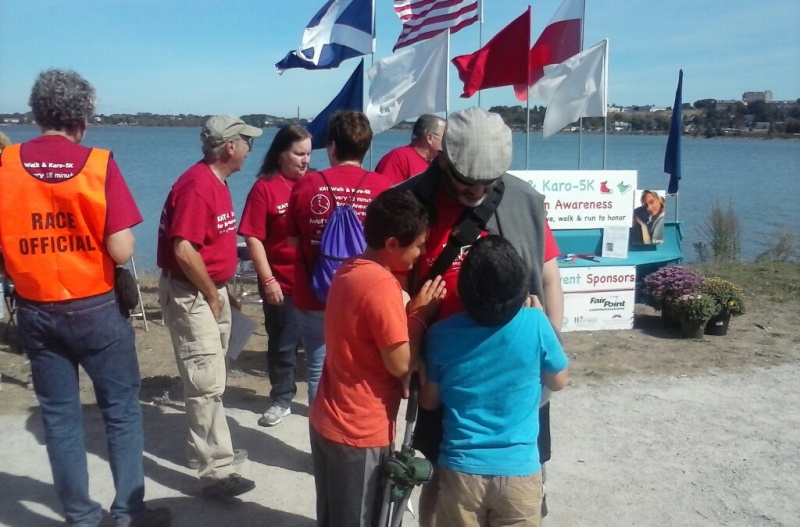 Shapiro's two sons huddle around their dad, Ken Shapiro, after he finished his KAT-Walk on Saturday. (The Lebanon Voice photos)

PORTLAND, Maine - Ken Shapiro may think of his post-brain aneurysm life as a semicolon, but most would consider it nothing less than an infinite number of exclamation points strung out along his almost six years of remarkable recovery.

Shapiro was one of some 20 brain aneurysm survivors who gathered along with their families, friends and caregivers on Saturday in Portland to celebrate their survival and participate in the Maine Brain Aneurysm Awareness' KAT-Walk and Karo-5K, the group's major annual fund-raiser.

A brain aneurysm is a weak bulging spot on the wall of a brain artery, very much like a thin balloon or weak spot on an inner tube. Aneurysms form silently from wear and tear on the arteries and sometimes can form from injury, infection, or inherited tendency.

Ironically, Shapiro's brain aneurysm ruptured after a successful surgery to clip it in October 2010.

"We'll never know why I sprung a leak," he quipped on Saturday after finishing his two-mile walk using a cane while being watched closely by his two sons, Gus and Wyatt.

Shapiro said he spent two weeks in a Boston hospital and two months at New England Rehab in Portland after the event.

His biggest side effects that still linger to this day are athetosis, which is characterized by unbalanced, involuntary muscle movements and difficulty maintaining a symmetrical posture.

While his physical impairment in both substantial and daunting, Shapiro has amazed people around him with his continued cognitive acuity, which he said had returned by the time he headed home about six weeks after his brain ruptured.

Soon after recovering, Shapiro returned to his job at Portland insurance giant Unum where he works in knowledge management.

"I help build the company intranet," he says matter-of-factly.

Unlike the Internet, an intranet is an internal system of sharing and storing information that is unique to a corporation that cannot be accessed except within the network.

He said having the aneurysm and being allowed to return to work has given him, "great appreciation for Unum as a company."

Unum specializes in disability insurance, the irony of which does not escape Shapiro, who on his website, "My live as a semicolon," talks about being disabled and working and what he calls the "dichotomy between public, somewhat fuzzy legal definitions of disability and the more prescriptive definition used to qualify one to be 'on disability' benefits from a private insurer or Social Security Disability Insurance."

Shapiro, who is formerly from New Jersey but now lives in Maine, has developed his website into a running narrative of his life since his aneurysm, including spreadsheets on everything from quantifying his physical motor skills to his speech as they chronologically have progressed over the years.

"I'm still hoping to improve (physically)," he said, quickly adding, "The science is a little fuzzy" regarding that improvement.

What wasn't fuzzy on Saturday as his two boys clung about him was the love of family that has helped him flourish despite the seismic event that happened almost six years ago.

"You have to find your own way," he said.

It seems as if Ken Shapiro has.