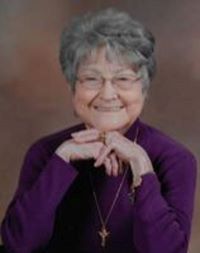 MILTON - When friends and relatives gather Tuesday at St. Mary's Church in Rochester for a Memorial Mass in remembrance of a Milton woman they'll be remembering her as the one with "the helium hand" who would always raise hers when given the chance to help others.

Marjorie Vesta Collins, who died Dec. 23 at age of 85, was what you might call a lifetime volunteer, her husband Bernie Collins said on Saturday.

A former director for Gerry's Food Pantry in Rochester and countless other causes, Marjorie Vesta (McGonagle) Collins "had a helium hand," Bernie Collins said. "If someone needed something done, she would raise her hand to help out. Volunteerism was in her blood."

An Air Force veteran, she spent time overseas in the Azores and in Turkey, where she grew fond of square dancing, even becoming a proficient "caller," rare for a woman.

"She really enjoyed the times she did calling, she really got into it," Collins said. "And she was good at it, and to be good, you had to practice a lot and she did."

In the mid-90s she also became very involved with the Cursillo movement, which focuses on showing Christian laypeople how to become effective Christian leaders over the course of a three-day weekend. The weekends includes fifteen talks, called rollos, which are given by priests and by laypeople. The major emphasis of the weekend is to ask participants to take what they have learned back into the world, on what is known as the "fourth day."

Collins said it started in Spain in 1946 because bishops wanted more men to go to church and established this movement where they would take a small course in Christianity, first the men then the wife would be taught on consecutive weekends.

Marjorie Collins earned the title of Rectora and was very involved for about 15 years, he said.

Her time as director at Gerry's Food Pantry spanned nearly a decade in the '90s.

She also volunteered with Military Family Services and the Girl Scouts.

The mother of six, she Marjorie Collins also had the distinction of receiving a commendation for her service from President George W. Bush, and along with Bernie, the blessing of Pope Benedict XVI on the occasion of their 50th wedding anniversary.

The bulk of her career was spent with the state of New Hampshire as a social worker in the Family and Child Welfare Division.