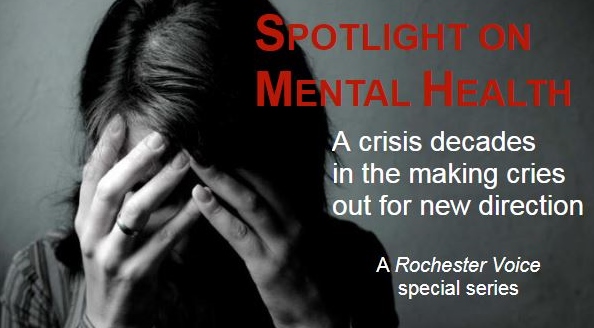 Editor's note: The Rochester Voice today begins a three-part series looking into the mental health crisis currently overwhelming New Hampshire's health provider system and what can be done to right the ship.

Part 1, Today: Mental Health patients who require treatment at New Hampshire Hospital in Concord are routinely housed for days or weeks at Frisbie Memorial Hospital while waiting for a bed in Concord, a system that causes a drain on hospital resources while delaying psychiatric treatment for those desperately in need.

ROCHESTER - Today at Frisbie Memorial Hospital there are a group of people waking up there who don't belong there.

They have serious mental health problems, diagnosed conditions that can only be properly treated at New Hampshire's main mental health treatment hospital in Concord.

And the figures bear it out.

Jessica Gionet, a registered nurse who is director of emergency services at Frisbie, said earlier this month the hospital houses an average of three mental health patients in their 17-room emergency department daily.

Gionet said the average wait time to get someone admitted to the 160-bed New Hampshire Hospital in Concord, the state's major mental health provider, is 7-10 days.

Meanwhile, the longest single hold for an adult at Frisbie was 31 days, she said. For a child, 14 days.

So how does a mental health patient wind up sleeping in a Frisbie emergency department bed while on a wait list to go New Hampshire Hospital in Concord?

According to Eide, it can happen in many ways; they could be suffering from mental health symptoms and be brought in by ambulance, police or family members. They could also voluntarily come in to get some help.

When that happens, Eide said, they do a full health evaluation on the patient to make sure there are no physical components and to determine if drugs are involved. They also do lab work.

Once the physical component is ruled out they call in Community Partners, the county nonprofit charged with counseling and treating the mentally ill. Community Partners will then decide if the patient is competent to go home, be a voluntary admission or an Involuntary Emergency Admission, or IEA.

If there is no medical issue, they can't be admitted to the hospital, Eide said.

Gionet explained that all of New Hampshire's regional hospitals have the same problem, having to house mental health patients waiting for beds in Concord. They work off the same centralized waiting list, too. The day we spoke to Eide and Gionet there were 60 patients statewide waiting it out in hospital emergency departments across the state.

But those waiting at Frisbie may actually have it better than in other hospital emergency departments. At the Rochester hospital mental health patients have their own rooms, not some curtained space. And they are cared for and provided three meals a day.

But for patients finding themselves cooped up in small rooms for sometimes weeks at a time, especially for those suffering from serious and profound mental health issues, there's bound to be problems.

And there are. Rochester Police provided The Rochester Voice with figures showing there were 99 calls made to the hospital from May 1 to July 30 and 20 two-man calls.

Rochester Police Capt. Jason Thomas, who provided the figures, noted that the 99 calls comprised all of the calls for service from the hospital, many of which may have had nothing to do with the emergency department or holding of mental health patients.

The two-man calls however, are almost exclusively activated when a patient is out of control and threatening harm to themselves or someone else, Thomas said.

In an interview with The Rochester Voice earlier this year, Rochester Police Chief Paul Toussaint said the two-man calls to the department were a huge drain on the force's resources, because they were always a "priority" and "two-officer" call.

Toussaint explained that when officers made such a call they have to either calm down the patient or take them to county jail, because there is just no other place to go.

He said earlier this month that it did seem like the number of two-man calls to the hospital had diminished.

Eide said some of the credit goes to former Rochester Police Chief Michael Allen who now heads up the hospital security force.

"About a year ago, we hired our own security force for the emergency department 24/7," Eide said. "They have created a therapeutic rapport with the patients. And patient satisfaction is much higher now."

Gionet said prior to the new security force it was not unusual for hospital providers and nurses to be assaulted by patients, but that hasn't happened since Allen came on board.

"Security still gets assaulted sometimes, but not nurses," she said.

It's not hard to see why tensions among mentally ill patients housed for long periods of time in a small hospital room could erupt.

Of course, if they are voluntary mental health patients waiting for a bed in Concord, they can come and go from their emergency department room as they please, Eide said. But if they are an IEA who have been deemed a potential danger to themselves or others, they have no such freedom.

"IEA patients must remain under security watch while at the hospital given their risk for self-harm," Eide said. "We do, however, support daily routines including showering, walking, and healthy eating."

Eide said the burden of housing a large number of IEAs in the emergency department not only puts a fiscal strain on the hospital but sometimes makes just running the department more challenging.

He said there have been times when they've had to treat typical emergency room patients in the hallways because there are no private rooms.

"We're always looking for ways to expand our capacity. But it hasn't reached a point where we don't provide optimal medical care for all our patients."

Eide believes the problem of having emergency departments house mental health patients has steadily increased statewide the past five years. He attributes it to an increase in patients requiring mental health services and a decrease in private markets for psychiatric beds.

He also said patients are staying at the Concord facility longer, often well over a month.

"Getting them out of there takes a long time, especially if they have no place to go due to health insurance or other reasons," he said.

The New Hampshire Hospital Association issued a statement regarding the problem to The Rochester Voice on Monday, saying in part, "New Hampshire families shouldn't have to wait for their loved ones to get the care they need when facing any kind of health crisis. Unfortunately, this situation is all too common in hospitals across New Hampshire as patients in an acute psychiatric crisis await treatment in the appropriate setting. The backlog of patients awaiting a bed at New Hampshire Hospital is a symptom of a broader, systems-wide problem: there is insufficient capacity across the entire mental health system here in New Hampshire.

"This is a truly devastating situation for the patient and their family, as well as caregivers in hospital emergency rooms across the state."

"The challenges surrounding the issue of mental health are largely a societal struggle, and the impact on emergency departments around the state is only one aspect," Caple said. "I'm proud of the dedication shown by all members of the Frisbie community to provide the best possible care to those who require it. FMH stands ready to join with stakeholders throughout New Hampshire to collectively address the challenges we all face on a daily basis."

Eide and Gionet believe the bottleneck into Concord has been getting tighter and tighter for a long time, and that bottleneck can only be alleviated with additional beds at New Hampshire Hospital.

"We need more resource on the state level to create more beds for patients," Eide said. "People require more and more mental health services. We do our best to find alternative solutions whether outpatient, group therapy, whatever it takes to alleviate the situation that caused the mental issue, so the more resources at state level, the better we will be."

Brian Collins, executive director of Community Partners, said on Tuesday he believes the solution could end up being a combination of more psychiatric beds in Concord and more at regional hospitals around the state.

In the meantime, Eide and Gionet will continue doing their best for those most desperately in need.

Part 2, Aug. 21: The solution is not only in more beds and treatment facilities but a change in attitude that this is a disease like heart disease or diabetes, not a stigmatizing condition that should be swept under the rug.

Part 3, Aug 28: The program that is hoped will begin a conversation to get help to those affected more quickly, saving lives in the process.