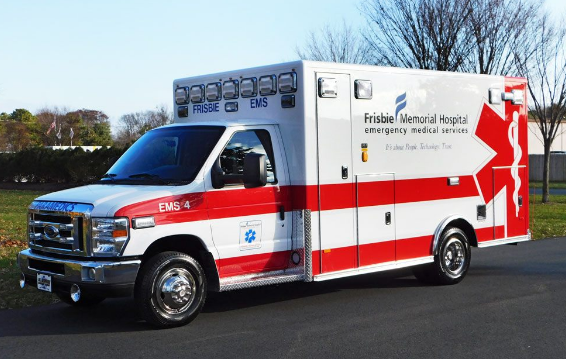 While Sanford, Acton, Milton and North Berwick have agreed to bill the $2,000 surcharge, Frisbie has not. (Courtesy photo)

LEBANON, Maine - Several municipal EMS agencies in towns surrounding Lebanon, say they have grown weary of covering the town's weekend medical calls and will begin imposing an immediate $2,000 surcharge on all calls to Lebanon if they don't respond with their own ambulance.

Sanford Fire Chief Steve Benotti is leading the effort, he says, "to force (the town's) hand to do the right thing."

"This is a wake-up call to the leadership of the town," Benotti said on Monday. "They have to decide to fund it or not; they can't rely on a free service agreement."

Both Benotti and Acton Fire Chief Rick Smith say the gist of the problem is that Lebanon is not responding to weekend medical calls, often having no ambulance available.

Most of the surrounding towns have mutual aid agreements with Lebanon, but mutual aid only works when all towns are able to respond.

"Our taxpayers and those of surrounding towns are tired of supporting them with our money," Benotti said. "Mutual aid is mutual aid, but this is not mutual aid."

Benotti stressed that they have no such problem with Lebanon's fire coverage or with weekday medical calls.

So far Sanford, Acton, North Berwick and Milton, N.H., have signed off on the plan which is effective immediately, Benotti said.

He noted that for every weekend call that Lebanon does not provide an ambulance response the town will be immediately billed $2,000, which must be paid within 30 days.

Benotti stressed that if the charge is not paid in time, all mutual aid will cease immediately.

Even if they are paid on time, all mutual aid will cease on Sept. 1 if Lebanon has still not begun to cover its own weekend medical calls, Benotti added.

Meanwhile, Frisbie Memorial Hospital's director of Emergency Medical Services stopped short of indicating whether he would join the group threatening the $2,000 surcharge or not.

Today, a statement from Gary Brock simply said: "From time to time a community may, for multiple reasons, experience an issue covering public safety services. Frisbie Memorial Hospital's EMS has in the past and will continue to assist in various ways with recruitment or training."

The only other town that borders Lebanon is Berwick, which provides its ambulance coverage through a private company that does not provide mutual aid to Lebanon, Smith said.

Benotti said he has spoken to Lebanon Fire and EMS Chief Kirk Flynn multiple times, but doesn't blame the new chief who was hired just last year for the problems the department is facing.

The Rochester Voice confirmed today that the town of Lebanon received Benotti's letter on Monday.