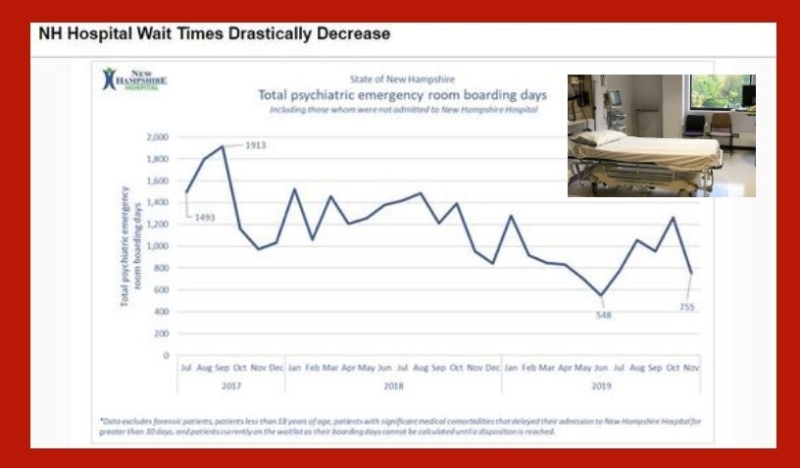 "I would credit the work in Concord for part of this decline," Eide said in an email. "However, our improving coordination with the Behavioral Health Unit at Portsmouth Regional Hospital has also significantly improved the well-being of our patients by decreasing their ED (emergency department) stay."

In August of 2018, Frisbie emergency department numbers showed the average wait time to get someone admitted to the 160-bed New Hampshire Hospital in Concord was 7-10 days.

This increase is in response to New Hampshire's critical need to address the number of patients in hospital emergency departments waiting for treatment in a psychiatric setting, the hospital stated in a press release.

Three weeks ago Gov. Chris Sununu and the New Hampshire Department of Health and Human Services released additional data highlighting New Hampshire Hospital's successful efforts to decrease the wait time for a bed.
According to new data, the average length of time an individual patient waited for admission to NHH or a designated receiving facility like PRH has decreased by some 40 percent.

It should be noted that Frisbie could well have seen those same numbers, but the hospital transitioned its EMR system in 2017 so they had less data to work with, Eide said.

The rebound in reducing wait times was hailed by Gov. Sununu in a Jan. 29 press release.

"Rebuilding our mental health system has been a priority since day one and I am pleased to have data showing that our efforts are paying off," he said. "It has taken several years of hard work and bipartisan cooperation to get to the point that we have a significantly declining waitlist at New Hampshire Hospital."