From reservoir to tap, Rochester's water gets a good going-over 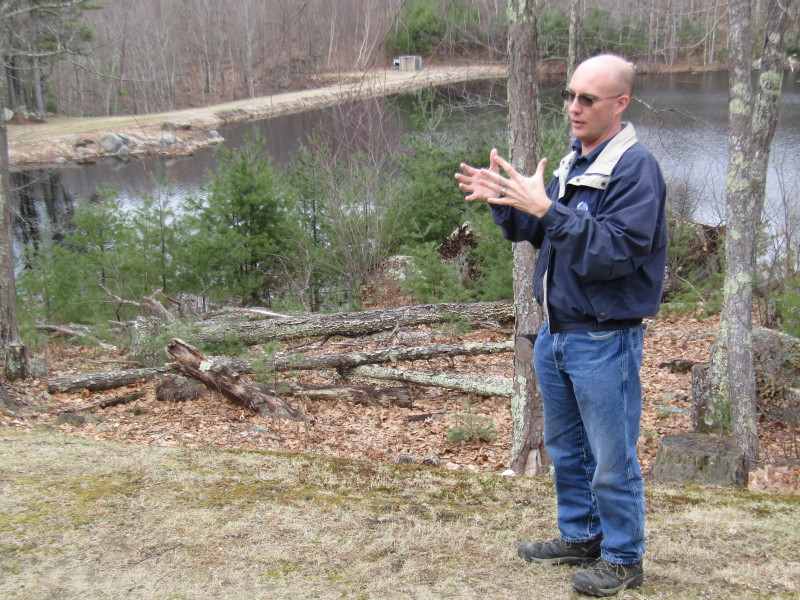 Rochester Water Treatment Plant Chief Operator Ian Rohrbacher explains the process from reservoir to tap while standing near the dam at the head of Rochester Reservoir on Thursday. (Rochester Voice photos)

ROCHESTER - In the time it takes to read this story analyzing equipment at Rochester's Water Treatment Facility will have made thousands of calculations devoted to ensuring the purity of the city's water supply.

And overseeing the team charged with making the city's Water Treatment Facility on Strafford Road run at its optimal level is Chief Operator Ian Rohrbacher, a passionate advocate for water quality and the science behind delivering it to city residents.

On Thursday the city released its annual Water Quality Report with full disclosure of testing data including any contaminants. Most of the 40 or so contaminants listed are naturally occurring from soil and mineral deposits and runoff, but Rohrbacher said in all cases the levels are far below both federal and state minimum safe levels.

The facility, located at the head of Rochester Reservoir, is state of the art and helps to deliver on average some two million gallons of crystal clear water to the City of Rochester daily.

The city has been getting its water from the Rochester Reservoir and nearby Round Pond since the 1800s, but it wasn't till 1987 that the treatment plant went into operation.

"Before that we just pumped it straight to the city," Rohrbacher said.

The treatment plant has undergone many upgrades since 1987, including most recently last year, which have turned the facility into nothing short of a technological marvel the city can be proud of.

For Rohrbacher, water purity is clearly both a career, and a calling. He said on Thursday his only goal is to make the water Rochester residents drink taste like it came out of a pristine mountain spring.

But to do that, there's lots of work to do first: some of it mechanical, some chemical.

For instance, once the water is pumped up to the treatment facility from the reservoir system, it goes through preoxidation, clarification and separation, which help to remove manganese and iron among other things.

Then equipment is used to move the water around in such a way that nonwater contaminants bond together and, because of their weight, sink to the bottom. Then only the water is siphoned off leaving those contaminants behind.

Next chemicals that control PH, chlorine and fluoride are added before the water flows into two traveling bridge backwashes where it flows through a series of filters that purify, "or polish," the water before it is finally ready to drink.

Only then is it pumped throughout Rochester and a small section of South Lebanon, Maine.

Meanwhile, in the plant's water testing room computers calculate water purity metrics at the rate of hundreds in a single moment.

Add to that 2,250 test data samples that were analyzed during 2018, and it's easy to see that clean water is serious business to Rohrbacher and his crew.

Rochester's Water Treatment Plant has earned recent kudos from inside the industry, but Rohrbacher admitted on Thursday that nothing gives him more satisfaction than when someone tells him Rochester's water tastes delicious.

The full report is available at https://www.rochesternh.net/sites/rochesternh/files/uploads/rochester_ccr2018_5.pdf