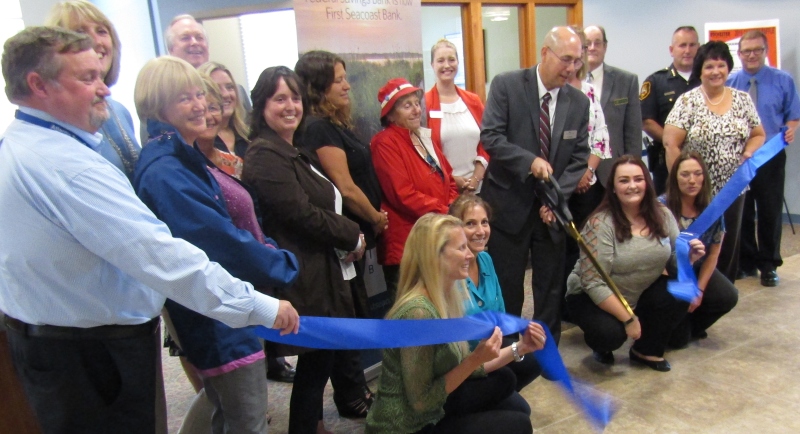 FSB President and CEO James R. Brannen does the honors during a ribbon cutting at their 17 Wakefield St. branch in Rochester on Tuesday. (Rochester Voice photo)

ROCHESTER - The former Federal Savings Bank, recently rebranded as First Seacoast Bank, held a ribbon cutting on Tuesday at their 17 Wakefield St. office to celebrate the 10th anniversary of the opening of their Rochester branch in 2009.

FSB President and CEO James R. Brannen was on hand to do the honors as bank officers and associates as well as city business leaders and officials looked on.

Brannen said while their name has changed, the same services, courteous personnel and attention to detail will continue to shape the bank's direction moving forward.

He said they'd been thinking about a name change for several years, but a more clear focus on rebranding began about a year ago as they felt the name might be losing traction with new arrivals on the Seacoast.

"We'd been talking about it for many years," Brannen said. "The bank started in 1890 and the name has changed six or seven times. We used to be known as Dover Federal Savings and Loan and many still refer to us as Dover Fed. Then back in the '80s we changed it to Federal Savings Bank. Recently we just began to feel it might be too generic."

Brannen said the new name of First Seacoast Bank gives them a better identity with Seacoast families as well as a geographical identity.

"And we keep the same initials," he said. "Many refer to us as 'FSB' and we wanted to keep that, too."

The bank, however, lost its former eagle icon, replacing it with a light- and dark-blue "wave."

The bank currently has some $405 million in assets, including $26 million at its Rochester branch.

The name change has had a soft rollout over the past two months, Brannen said, with an official name change taking place a week ago.

The reaction to the changes has been overwhelmingly positive, he said.

"The reaction is universal acceptance, It's been 100 percent positive," added Brannen. "They say, 'I like the logo' or 'I like the name.' That being said, while we internally are cautious about the name change, it's a high risk thing to mess with a brand that's already successful, which we are. So when you monkey with that or change that you're always taking a risk.

"But at the end of the day if the checks still work and the debit card still works, if the online banking still works, and the same friendly people are in the lobby helping you, that's what they want; they want service and functionality."

Tuesday's ribbon cutting was presented by the Greater Rochester Chamber of Commerce.