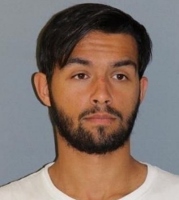 DOVER - A Fugitive of the Week, who was arrested in Rochester on habitual offender and conduct after an accident charges in November, turned himself in at the Strafford County Sheriff's Office on Monday.

Ricky Alan Davis Jr., 24, of Dearborn Road, Wakefield, had been sought on multiple outstanding arrest warrants issued by Strafford County and the New Hampshire Parole Board.

These warrants also included a bail violation for an alleged second degree assault by strangulation and a parole warrant stemming from his original conviction and sentence for armed robbery.

Davis was remanded to the Strafford County House of Corrections pending a court hearing.

Warrants for his arrest were issued on March 5 and April 17 by the New Hampshire Parole Board and Strafford County.