Gardner, who defended state's first-in-the-nation primary for 45 years, retires at 73 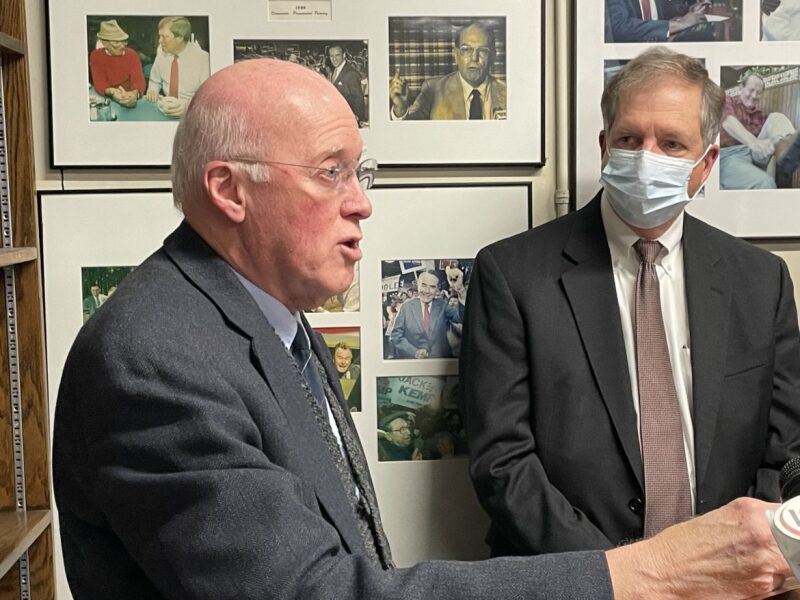 Secretary of State Bill Gardner announced his retirement Monday and is turning reins over to his Deputy, David Scanlan, pictured at right in the Secretary of State's office at the State House. (Paula Tracy photo)

CONCORD - Secretary of State William M. Gardner, 73, announced his retirement Monday, after being the guardian of the state's election laws since 1976.

Considered the longest-serving Secretary of State in the nation, Gardner announced his Deputy Secretary of State, David Scanlan, will take the oath of the office in the coming days to fill out the remainder of his term, with one year left.

Scanlan has served as his deputy since 2002 and was a former state representative and licensed forester before taking elected office.

Scanlan said his plan was to continue with the staff to serve the citizens of the state in the same manner as Gardner.
Known nationally, Gardner has been an ardent defender of the state's first-in-the-nation Presidential primary and a fierce defender of its role in vetting and choosing a leader despite the state's lack of racial diversity.
Gardner said that institution is stronger every four years "because every time we have one, it makes it stronger and we are...wide-open opportunity for anyone to take a chance. As long as we keep that, the tradition will continue."

He noted, however, "there will be challenges down the road" to change it for political reasons and to give that privilege to other states for various reasons. Gardner said he worries that so many feel there has been election fraud in recent years and that the President was not lawfully elected.

He maintains that elections in New Hampshire have the highest of integrity and that people should have faith in the process.

"This, for our future, is extremely important, that people have confidence that their vote was accurately counted.
Gardner has served New Hampshire with 11 governors, 17 Senate Presidents, 13 House Speakers, and 14 attorneys general.

He said the job "is all about people and it is changing now because of changing communication and lesser interaction and that makes it more difficult for people to come together," and get consensus or solutions.

"I don't have a solution, but at least I can be a vessel to talk about things that I have seen and what I hope for," he said.

Standing in his signature wool vest which he has worn to greet Presidential candidates, he talked about his greatest accomplishments in office.

He said a moment he was most proud of occurred a few months after he arrived in office when he found a hidden copy of the Declaration of Independence, the Bill of Rights, and the 11th Amendment.

These preserved documents were on their way to the trash when he found them in silver tubes. Their whereabouts were unknown until then and they are extremely rare.

In making the surprise announcement, Gardner said it was not about his health or politics but he thought that the time was right for a transition in the middle of the term.

He stood with members of his staff and supporters who have a combined 217 years of service to the Constitution of the state and the duties of the office.

It included Bob Ambrose, senior deputy secretary of state who was the first deputy for 25 years from 1977 to 2002, and Scanlan has been from 2002 to now and Karen Ladd who was working in the office before he started.

Also standing alongside him was state Sen. Lou D'Allesandro, D-Manchester, who was Gardner's school teacher when he was 13 and 14. He noted the impact of D'Allesandro and President John F. Kennedy at that time who asked the nation to not "ask what your country can do for you but what you can do for your country."

He said he and D'Allesandro recently talked about the effect that motto had on them and their future years of service.
Gardner said he feels it an "honor to know that Dave will be the one to take over as Secretary of State. He has earned my utmost respect and confidence to serve in that Constitutional office and this comes as probably the smoothest time for it to happen in the cycle of a Secretary of State."

He called his staff "unsung heroes of many important functions. They have shown their love for this state and dedication and commitment.

"I will do my best in the years to come to do all I can by writing and speaking to defend the role of the state...in conducting elections with the checks and balances that both constitutions require. This is what kept us and our country as a self-governing free people longer than any government on earth."

He said New Hampshire is a special place for so many reasons.

"I will continue to stand up for the best of those traditions...first and foremost our first in the nation primary."

He said he will be "forever grateful for the adventures of serving the people of this state in the statehouse."

Republican Gov. Chris Sununu, who has long been a supporter of Gardner and his leadership, said in a statement:
"Granite Staters owe a tremendous debt of gratitude to Secretary of State Bill Gardner...For decades, Bill Gardner has fiercely protected New Hampshire's first-in-the-nation presidential primary and overseen our elections that are truly a point of pride for our state - always open, fair, accessible, and accurate. We will miss Bill and his vast institutional knowledge of New Hampshire people, politics, and government. Here's to a well-deserved retirement and best wishes from all the Sununus."

Also, Senate President Chuck Morse, R-Salem, issued a statement which read "Secretary of State Bill Gardner's decision to step down ends a remarkable era in New Hampshire politics. He protected our elections and our first-in-the-nation primary with integrity and patriotism. We owe him so much for his extraordinary 45 years of public service. He has been a good friend and true statesman. There will never be another Bill Gardner."

Senate Democratic Leader Donna Soucy of Manchester said: "As Secretary of State, Bill Gardner has been a steadfast champion for New Hampshire's First-in-the-Nation Presidential Primary--one of our greatest state treasures. Secretary Gardner has fiercely defended our primary over the years, ensuring that Granite Staters play a critical role in our country's presidential elections. I am deeply grateful to Secretary Gardner for his decades of tireless commitment to the State of New Hampshire, and I look forward to honoring this legacy by ensuring that New Hampshire continues its tradition of robust civic engagement, accessible elections, and ensuring that Granite State voters have confidence in the integrity of our elections."

The Secretary of State's office oversees all general elections, primary elections, voter registration, and recounts within the state, including the New Hampshire primary. Additionally it has divisions that control Archives and Records Management; Corporation and Uniform Commercial Code; Securities Regulation and vital records.

The following boards and commissions are attached to the office for administrative purposes: