Gerry Gravel remembered as a money man who cared about people, community 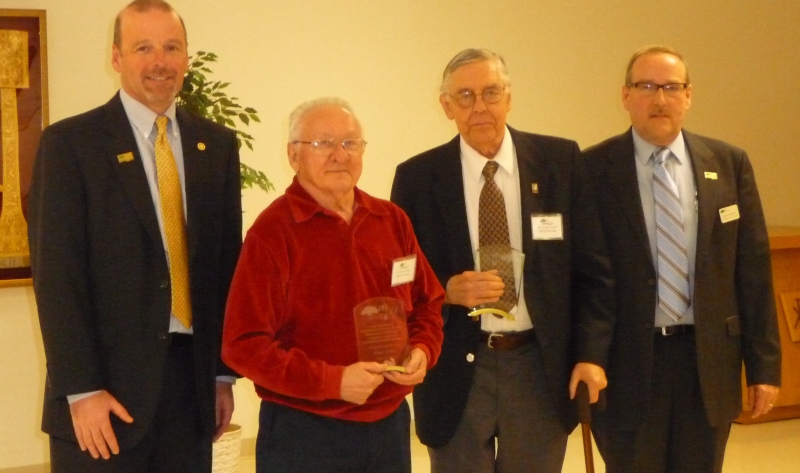 Taken during their 50th anniversary celebration in 2012, from left, current HRCU president and CEO Brian Hughes, original founders Bob Chasse and Gerry Gravel and Dana Flanders, chairman of the board. (Courtesy photo)

ROCHESTER - It was almost 57 years ago that Gerard Gravel, fresh off beginning his own Rochester accounting firm, contributed one-eighth of the startup money ($50) that founded the Holy Rosary Credit Union.

The resulting pool, the liquid assets of the credit union that first day, was a total of $400, HRCU President and CEO Brian Hughes said today. In the early days customers' deposits were kept in a lockbox in the Holy Rosary Church basement.

Gravel, who was known as "the brains behind the credit union," died Friday at his home. He was 88.

"Gerry had an accounting background, so he was instrumental in the credit union's beginnings," said Hughes, who noted that when the credit union first opened in April 1962 it was a bit different than banking is today.

"Parishioners would go into the basement of the church and get a handwritten receipt for their deposit," Hughes said. "The first loan they gave out was for heating oil."

HRCU, which started with such humble beginnings, now has five offices, 22,000 members and some $300 million in assets.

In 2012, on the credit union's 50th anniversary Hughes helped to oversee the writing of a book that details HRCU's history called Comme D'or, French for "Like gold."

"He was very proud of the credit union," Hughes said. "Every year we'd do the annual report, talk about financials, and he'd say how happy he was we were doing so well. He always came to our annual meeting."

After the HRCU grew too big for the church basement, it was located at Gravel's home on Wakefield Street for a time before its first dedicated office was opened.

Meanwhile, Gravel ran his longtime accounting firm out of a second floor office at the corner of Hanson Street and Columbus Avenue.

But Gravel's passions went far beyond banking and accounting. The lifelong Rochester resident was also active in The Rochester Elks, where he was elected Exalted Ruler in 1976.

In 2013 he was recognized as the Greater Rochester Chamber of Commerce Citizen of the Year.

Denise Gravel said her father was dedicated to his business and the city of Rochester.

'He loved working as a CPA and his intelligence, humor, responsibility and righteousness was given toward the community and his family," she said today. "And he had a great heart and was loved and respected by his family and community."

His full obit is published on The Rochester Voice obituary page.