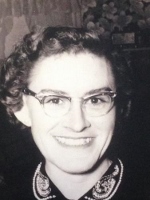 WEST OSSIPEE - Gertrude Richards Dale, 90, of West Ossipee, N.H., died peacefully on Sunday, February 12, 2017, after a courageous battle with Alzheimer's. She was born in Atlanta, Ga., the daughter of Arnold and Elsie Richards.
Following her family's move to Rochester, she graduated from Spaulding High School and went on to attend Concord Nursing School receiving her nursing degree. She married Arthur J. Dale of West Ossipee, and the couple operated Dale Villa Greenhouses in West Ossipee for many years.
Gert, as she was lovingly called was known for her extraordinary gardening skills, common sense and kind hearted nature. Gert was blessed with a strong spirit and the ability to see the best in everybody. She was also very active in her beloved community of West Ossipee serving as a 4H Leader and was a founding member of the West Ossipee Women (WOW) and many other civic minded endeavors.
Gert followed her desire to help others as a Registered Nurse at Camp Calumet in the early 1950s, followed by serving as the Ossipee Central School nurse for many years and later at the Carroll County Nursing Home. She continued as a private nurse before retiring to continue her gardening passion by operating a greenhouse with her recently retired husband Arthur. Gert also was known for creating one of a kind special occasion cakes.
Gert was predeceased by her husband of 34 years Arthur, her sisters Georgianna Berry and Leone Nickerson both of Rochester. She is survived by her daughters Cynthia Schwartz and her husband Rick of Freedom, Marcia Floria of Brownfield, Maine, Nancy McClare and her husband Kelly of Freedom and Susan Fullerton and her husband Peter of West Ossipee. She leaves behind ten grandchildren, 12 great grandchildren and several nieces and nephews and her sister Arlene Roberts of Rochester.
Gert's Family would like to express their most sincere appreciation to the doctors, nurses and support staff of the Mountain View Nursing Home.