Get ready for first bomb cyclone of '22; morning commute could be a nightmare 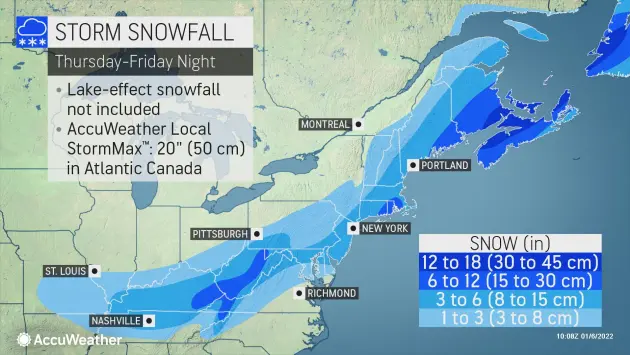 Rochester-area residents could face a nightmare commute Friday morning when some of the heaviest snow from a daylong storm is predicted to pummel the region.

The Northern Seacoast can expect anywhere from around four inches all the way up to almost afoot, area forecast maps indicate.

"This will be a disruptive storm, and since cold air will be preceding the storm, snow will accumulate on roads as soon as it starts," AccuWeather Meteorologist Bernie Rayno said.

Even though the storm will be moving along quickly, it will strengthen off the mid-Atlantic and New England coasts, according to AccuWeather Senior Meteorologist Joe Lundberg. It is likely to become "the first bomb cyclone of the 2022 winter season" in the Northeast, he added. A bomb cyclone is defined as a storm that's central pressure plummets by 0.71 of an inch of mercury (24 millibars) within 24 hours. That means the storm could whip up strong winds and pull in more moisture, helping it to fuel heavier snow rates as it chugs up the Eastern Seaboard.

A blizzard is likely to unfold from eastern Maine across the border into New Brunswick, Canada, where winds will frequently reach 40 mph or higher, and snow and blowing snow will reduce the visibility to under 1/4 of a mile at times. These intense conditions could occur in parts of eastern Massachusetts as well on Friday afternoon, depending on how quickly the storm undergoes bombogenesis.

Locally, the snow is expected to begin early Friday morning around 1 a.m. when temperatures will hover in the mid-20s.

Snow will persist throughout most of the day finally winding down around 6 p.m. Temps on Friday won't get out of the 20s ensuring this will be an all-snow event.

Saturday will see sunny skies and a high of 25.

Accuweather material was used in this report