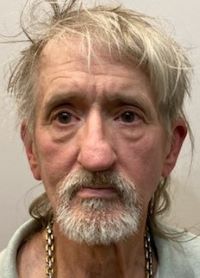 GONIC - A 69-year-old Gonic man driving an unregistered vehicle likely turned a summons into an arrest on Tuesday when he refused to pull over during a traffic stop on a stop sign violation.

The arrest unfolded around 9:50 p.m. when an officer on patrol on Gonic Road noticed a vehicle not stop at a stop sign before entering the roadway.

A short distance later the vehicle put its directional on again and pulled into a driveway.

Instead, "He started walking away from the vehicles and was not stopping as requested," Pinkham said.

The officer quickly caught up with the subject and began an arrest, which the male resisted by pulling his hands and arms away during the cuffing, Pinkham added.

Lloyd A. Cousins, of Gonic Road, was charged with disobeying an officer, resisting arrest, driving after suspension, unregistered vehicle, and a stop sign violation.