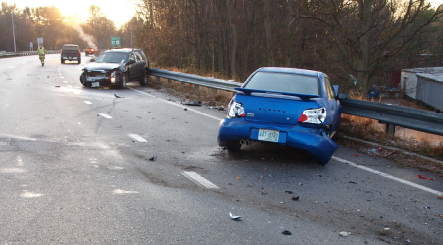 DOVER - A Good Samaritan was seriously injured today when he stopped to assist an accident victim on the Spaulding Turnpike in Dover.

What ended up being a three-car pileup occurred just south of the Exit 7 onramp around 5:35 a.m. when State Police say a soutbound 2004 Subaru Impreza lost control and crashed into a guardrail on the right hand side of the roadway.

An operator of a 2019 Chevy Silverado pickup then stopped to help those in the Subaru when a following 2008 Cadillac lost control, slid into the Subaru and struck the Good Samaritan who had been driving the pickup.

The operator of the Cadillac Jared Colbath, 44, of Somersworth, was not injured but was taken to Wentworth-Douglas Hospital as a precaution.

All aspects of this crash remain under investigation by State Police, however road and weather conditions appear to be contributing factors.

The road was closed for around three and a half hours while troopers investigated the crash and oversaw removal of the vehicles involved and road debris. Traffic was diverted during the closure.

Assisting Troop-A at the scene were, Troop-G barracks, the Dover Police and Fire Departments, NH Department of Transportation, and National Wrecker.

Anyone with information pertaining to this crash is asked to contact Trooper Geoffrey Miller, NH State Police, Troop-A at (603) 223-8490, or via email at geoffrey.miller@dos.nh.gov.