Got a hankerin' for CBD gummies? You can get 'em down the road apiece 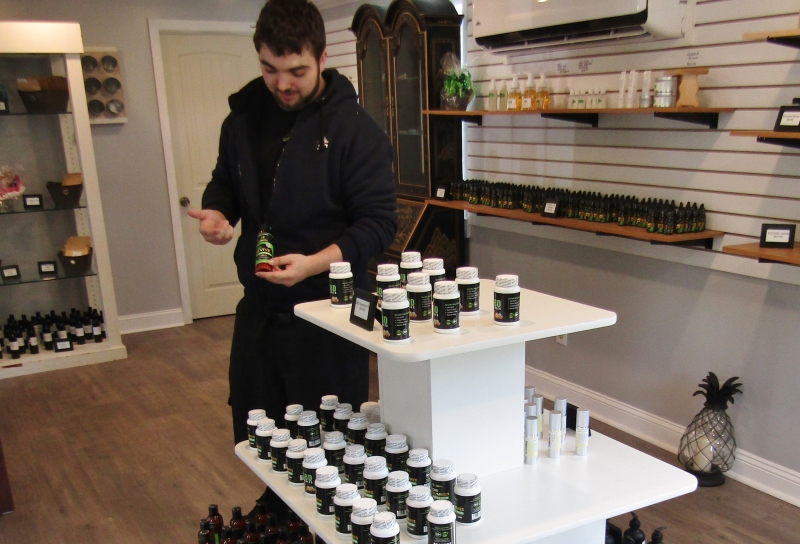 SOUTH LEBANON, Maine - If Rochester residents go a couple of miles into Maine on Route 202, and stop off at the Harvest Goddess, they're likely to see something they've never seen before without looking over their shoulders for the blue lights: neat rows of various cannabis strains in mason jars awaiting legal sale to the state's medical marijuana patients.

But Harvest Goddess, located at 1104 Carl Broggi Hwy. (Route 202), not only sells marijuana to medical marijuana patients but also legal CBD products, including edibles, which contain either miniscule or no amounts of THC, the active ingredient in cannabis that produces the high associated with the plant.

CBD products come mostly in the form of salves, tinctures or edibles, including gummies. CBD oil can also be vaped.

Rochester recently forbade the sale of edibles because CBD is a federally registered pharmaceutical, and since a drug can't also be a food supplement, they were taken off the shelves of several city retail outlets as well as Fresh Vibes, a downtown restaurant that has since moved to the former Minor's Restaurant just over the line in Lebanon from East Rochester.

Following Rochester's banishment of CBD edibles, the state of New Hampshire sent out an advisory along the same lines to all cities and towns statewide.

Maine, however, declared CBD a food earlier this year, allowing a full menu of edible CBD products across the Pine Tree State.

Brian Charland Jr., who works at Harvest Goddess with his mom/CEO Grace Charland, said on Thursday that people should be open to using CBD but "they need to do some research, find out what the ingredients are and how it's processed."

He said their store lists all the ingredients in their CBD products, including whether it may have trace amounts of the psychoactive THC.

Any CBD products that have trace amounts of THC (.3 percent or less) will have a "teardrop" icon, he said, something important for anyone to know if they are subject to random drug testing for their work.

CBD is a naturally-occurring cannabinoid found in hemp, a type of cannabis plant.

And while CBD is derived from hemp, if it has more than .3 percent it is then classified as cannabis.

Charland, a huge proponent of the benefits derived from CBD, said their products are rigorously tested for safety and purity and treat a myriad of ailments from insomnia to pain and inflammation to Parkinson's disease.

Owner Brian Charland Sr., said the garden center specializes in hydroponic gardening, which can be used in the growing of cannabis, hemp or any vegetable, fruit or plant.

He said he and his family keep pretty busy running the two retail stores, but he's hoping someday the town of Lebanon will vote to allow cannabis social clubs. If they do he said he'd be the first to open one.

"I'd love to start a social club where you can go get high with another person and not have to do it in your cellar or your garage," he said. "It's more fun if you can come out."

Brian Sr. said for now, they're very happy with the way the business is thriving and the location, which sees thousands of cars pass by each day.

"We see the wandering eyes (when they see the sign)," he said. "They come in and say 'where's the marijuana bar.' Of course we don't have one, not yet."