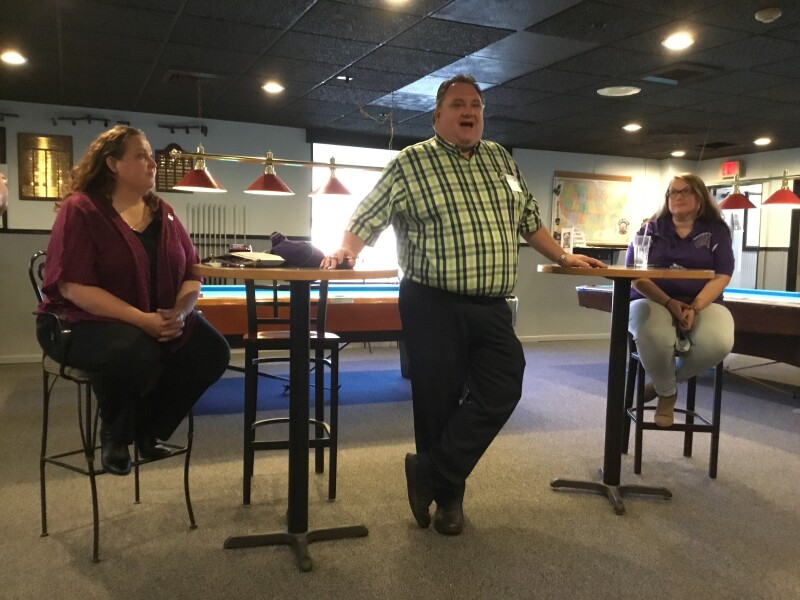 Grand Exalted leader Paul Ryan speaks during his visit to the Rochester lodge. At left is his wife, Stacey; at right is member Beth Sanborn, the wife of Matt Sanborn, Rochester Elks Loyal Knight. (Elks photo)

ROCHESTER - The national leader of the Benevolent and Protective Order of Elks was in Rochester on Sunday to congratulate the lodge for its volunteer work in the community and across the state and, on the eve of Veterans Day, to reaffirm the fraternal organization's ongoing commitment to serving our veterans.

Grand Exalted Ruler Ryan, the highest ranking officer of the nearly million-member group, stopped by around noon on Sunday as part of his monthlong national tour. The Rochester lodge has 928 members.

This November, as well as every month of the year, Elks will serve thousands of veterans across the country whether they are in hospitals, at home or dealing with the stark reality of homelessness or depression. It is estimated that Elks volunteers served more than 1 million veterans last year.

In addition to supporting other nationwide programs, Elks Lodges across the country serve the needs of their communities. The Elks have Lodges in 14 New Hampshire towns and cities with a statewide membership of some 7,400 members who provided more than 74,557 hours of volunteer help in the Granite State last year. The Elks' total contribution to the state of New Hampshire last year amounted to $2,914,747. Their total contributions nationwide amounted to $381,194,272.

For additional information on the organization, visit the BPO Elks website at: http://www.elks.org or the New Hampshire State Elks Association Web Page at: http://www.nh-elks.org.