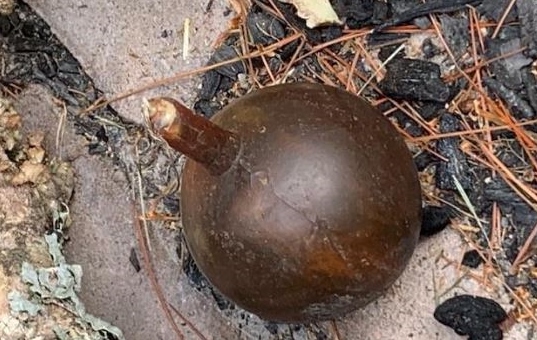 ROCHESTER - A suspected explosive device detonated by a State Police bomb squad on Wednesday that was said to have rocked the Haven Hill Road area of the city seems to have been a bit of a dud.

The device was found inside a Regency Court residence by individuals going through the belongings of a recently deceased family member who served in World War II.

Rochester Police Capt. Todd Pinkney said on Thursday that the person who found it said he believed it was a grenade obtained by his uncle.

"(The nephew) put it in the fire pit out away from the residence and called us," Pinkham said, adding the man said the object was "weighted" and looked similar to a very old grenade.

Out of an abundance of caution they called Rochester Police, who called in the State Police bomb squad to dispose of what may have only been a souvenir and not a bomb late Wednesday evening.

A local news story reported the State Police detonation of the object shook nearby homes and was heard by residents in Strafford County and York County, Maine, but Pinkham said on Thursday, "It is unknown if there was anything explosive in it and seems like the noise etc. may have been just from State Police (detonation)."

It should also be noted that York County is just two football fields from the sandpit.

Even though Pinkham said it wasn't clear whether there was anything dangerous about the find, he urged citizen who found such items who weren't sure to call police and let them handle it.