GUILTY ON ALL COUNTS; Jurors take an hour to reach verdict in Smith case 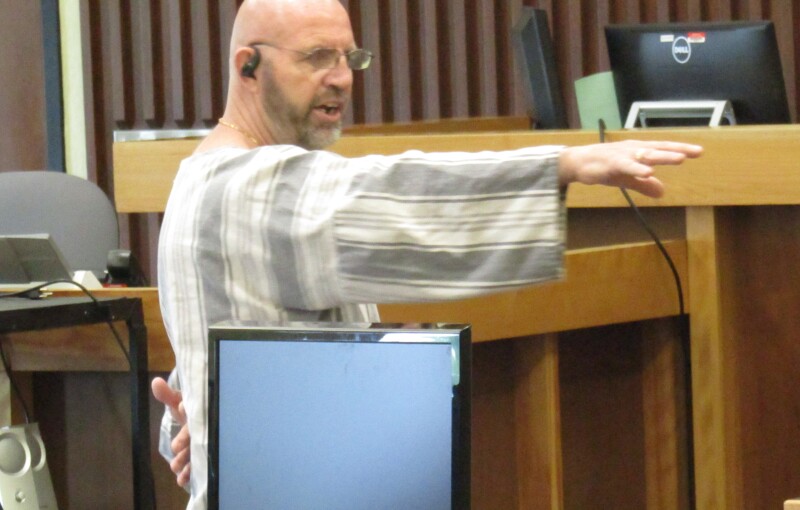 DOVER - It took a jury about an hour today to find a former Milton Public Works chief guilty of trying to bilk millions of dollars from a Rochester woman's estate.
Michael R. Smith, 59, a former Milton resident who now lives in Avon Park, Fla., is facing up to 75 years in prison on three attempted theft by unauthorized taking counts and two theft by unauthorized taking counts.
Smith used forged documents, phony notary seals and fake letterhead to impersonate attorneys and notaries in his scheme to become sole heir and executor of the two-million dollar estate of Mary G. Kibbe, a former Milton selectperson who died in November 2017, just months after Smith moved into her palatial 5,000 square foot home on Stanley Pond Drive in Rochester.
Smith actually got a hold of and spent about $500,000 of Kibbe's money, mostly in the days and weeks immediately following her death on Nov. 11, 2017, including a couple of mobile homes in Florida, a brand new Chevrolet truck for $41,000 and a trailer for $7,000. He also offered to pay thousands of dollars for a local attorney to write a letter to authorities saying that his shenanigans were kosher. The attorney refused.
Smith, wearing a gray- and white-striped Hare Krishna-like garb, continuously swiveled back and forth in his defendant's chair, often scowling at a monitor that displayed some of the fraudulent documents as Senior Assistant Attorney General Brandon Garod told the jury step by heinous step just how Smith had concocted a scheme to get himself signed onto Kibbe's bank accounts, annuities and become sole heir to her life savings.
Garod noted that whenever Smith submitted forged and phony documents to banks or credit unions he, while implying he was Kibbe, would explain why "she" wanted to make him sole heir and executor.
"If this were a legitimate request, Kibbe would have no need to give an excuse," Garod said. "This was just Mr. Smith trying to convince the asset managers her request was genuine.
He noted that in some of the letters that fraudulently represented they were local attorneys, Smith often used poor grammar and peppered the copy with exclamation points, adding that most attorneys don't use exclamation points so readily in their verbiage.
In Smith's closing arguments he often invoked God and religion and said the jury would find the truth through Jesus Christ.
"Know that I am gifted to get special protections from God," he told the jury.
Smith never really said he didn't do what he did in his closing arguments, but mostly tried to convince jurors the state's evidence was collected improperly and that if a security camera system in his home hadn't been unplugged by police, the dishonesty of investigators from the Attorney Generals office would've been exposed.
Smith, who represented himself throughout the trial, opted to not testify on his behalf.
His bail was continued while awaiting sentencing.