Hail to the Chief: Sanborn retires after 40 years as city firefighter, 12 in charge 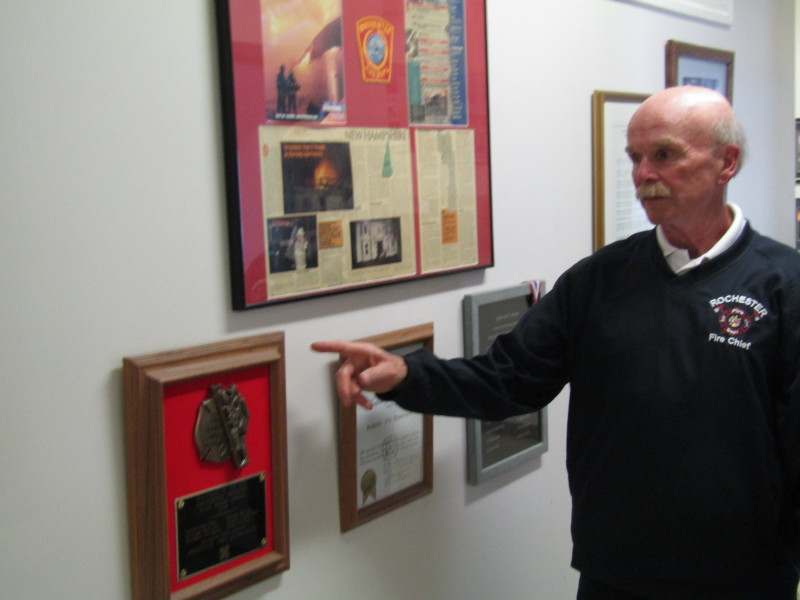 Retiring Rochester Fire Chief Norm Sanborn points out some of the plaques honoring the department for its heroism in a 2011 fire that was features on network television. (Lebanon Voice photos)

COPYRIGHT2017© ROCHESTER - Rochester Fire Chief Norm Sanborn joked that he had to be out of the firehouse by midnight Wednesday when his retirement became official, but admitted if he heard an engine's siren at 1 a.m. he'd feel a little funny when he realized he could just rest easy.

And so a 40-year career as a Rochester firefighter ended Wednesday not with a parade or party, just a quiet lunch upstairs in the meeting room talking with friends and colleagues, telling and retelling old war stories and looking back on the many years of camaraderie and commitment none but a firefighter would know.

Sanborn simply reached in his pocket to highlight one of those commitments.

"It's a life commitment," he said of being a firefighter. "Before anyone thinks about a job like this they have to realize that."

He then recounted the last time that firefighter fact of life reared its fiery head last Father's Day.

"We were at our house with a big cookout to celebrate, and the food was just done and we were sitting down to eat." He paused. "And then the big Gonic fire; I had to go."

Of course, he was referring to the 6-alarm blaze that destroyed Phagin's Bar and Grill, in which more than 100 firefighters tried unsuccessfully to save the downtown landmark.

But there was another fire that left an ever more indelible mark on his memory, the January 2000 fire in which firefighters saved the lives of an entire Summer Street family.

"Firefighters climbed ladders and went up into the second floor of the burning house," Sanborn recalled. "They brought two children down; they were limp in their arms."

Sanborn, who was on the ground in a command position, said both children were resuscitated by paramedics and the mother was rescued, too.

As happenstance, a bystander filmed the entire firefighting and rescue effort and a story and pictures were published in a firefighting magazine. Soon after ABC's "Good Morning America" asked if they could come to Rochester and do a whole live segment documenting the lifesaving effort.

"They brought all their trucks and equipment up here and did about an eight-minute segment," said Sanborn, who was an assistant chief at the time. "That was probably the most rewarding, that type of rescue."

He added that about 10 years later the parent came back with the two children to personally thank the department.

While commitment is one mantra of firefighting these days, another emerging focus is on firefighter safety.

It's another thing Sanborn can be proud of.

"Ever since we've been here, we never had a firefighter seriously injured in a fire," he said.

Sanborn credits this to a combination of keeping the firefighters in top shape, and topnotch safety equipment like air packs and the whole arsenal of firefighting tools.

He said better tools are necessary because the toxins involved in firefighting have gotten so much worse.

"The smoke is a lot worse now, you can take one whiff of the wrong smoke and it can kill you," he said. "You used to be able to stick your head into a burning building and see how bad it was in there. You can't even do that anymore without an air pack, because the smoke's so bad."
He said firefighters used to think they were macho going into buildings with no breathing apparatus on.

"They'd (proudly) call themselves smoke eaters," he said. "We don't allow that anymore. Whenever you go into a fire, there are hazardous gasses, you always wear an air pack.

"Now we have CO meters, gas meters to make sure the situation inside meets our standards before we let them take off their air packs."

Looking back on all his accomplishments in Rochester, including his long tenure and successful advocacy in 2008 for a $900,000 tower truck, Sanborn said it's all part of the job.

"It's bittersweet to end this chapter of my life because I've enjoyed coming to work every day," he said. "I'm proud to call my colleagues throughout this city, county and state my friends."

While Sanborn's retirement begins today, it's not like he won't be staying busy.

He'll continue on as an assistant track coach at Spaulding High and spending time at his seasonal campground in Freedom.

He also says later this summer he'll be taking the family to Disney World.

Asked if he thought he might retire down there, he shook his head.