Happy Labor Day! So could it get much worse? 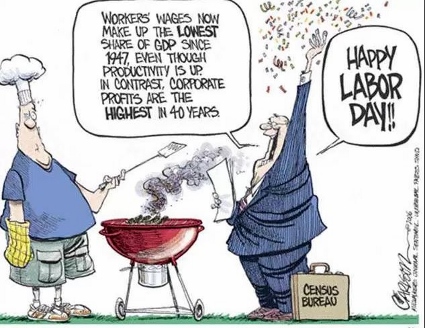 So, on this Labor Day, let's remember that meme making the rounds before the last presidential election. It shows the Obama campaign worker talking to a couple of average working stiff Americans.

"So aren't you better off than you were before President Obama took office?"

"Well, I guess so," the husband replies. "We qualify for food stamps now."

In fact in 2014, when there were about 310 million people living in the United States, about 46.5 million were on food stamps. That's about one in seven people.

But it gets worse. Recent bureau of labor statistics show that in one out of every five households, there is no working family member.

Factory jobs, formerly the bedrock of middle-class jobs that paid well, are on a steep decline, having hemorrhaged to places like Asia, South America and Mexico.

Within the Strafford Regional Planning Commission, which represents 16 towns and cities from Durham to Wakefield and Milton to Brookfield, manufacturing jobs went down by 15 percent between 2005 and 2009. It was the same for New Hampshire as a whole. Other industries hit hard included agriculture and forestry jobs (-22%), construction (-30%) and real estate (-14%).

Meanwhile, poverty is at an all-time high with some 45 million Americans (14.5%) below the poverty level, according to Sept. 2014 statistics.

And the share of Americans who own their homes was 62.9 percent in the second quarter of this year, the lowest since 1965, according to a Census Bureau report in July.

Perhaps the most bitter pill for those who are working is the incredible phenomenon of wage stagnation even as productivity increases.

This is despite real GDP growth of 149 percent and net productivity growth of 64 percent over this period.

In short, the potential has existed for ample, broad-based wage growth over the last three-and-a-half decades, but these economic gains have largely bypassed the vast majority, the economic think tank explains.

Now add to this the chronically unemployed who have been unable to find work for years, have stopped looking and are no longer on the unemployment rolls.

Many of them have had to liquidate 401Ks to survive and have little to retire on once they do retire.

Others seek disability income, some of them legit, but many not. Facts show that the rate of disability goes up with unemployment rate. That's why there's more people on disability now than 10 years ago. In fact, in Maine some 7½ percent of folks between 18-64 were on disability in 2011, according to a report from National Public Radio.

Nationwide, some 14 million people are drawing a disability check every month. Many of them work under the table. One woman I spoke to recently recounted how a person she met through her work openly admitted to doing construction full time while collecting disability. He said he had to to make a living.

"My family can't live on a disability check, I have to work," he explained.

Of course, what he's doing is illegal, but it doesn't seem so to him.

Another problem is that those on disability don't get counted in the unemployment numbers. They're invisible.

Interestingly, back pain and mental illness, health issues with some of the widest latitude for diagnosing, are among the fastest growing reasons given for drawing that disability check. In 1961, back pain and other musculoskeletal problems accounted for 8 percent. In 2011 it had jumped to almost 34 percent. Likewise mental illness, which was less than 10 percent in 1961 doubled to 20 percent in 2011,.

All in all, we are in dire straits.

So welfare, disability, unemployment, wage stagnation and lack of manufacturing jobs are all a part of this larger economic malaise that government jobs cannot and will not resolve.

Of course we all know that a large percentage of those who take advantage of these needs based programs like welfare truly need them, however, we would be naive to think there aren't those out there who are using them illegally.

The overriding fear here is that if America doesn't get its manufacturing swag back like it had post WWII, the downward spiral of the American dream and the dreams of the American worker will continue unfulfilled, nothing but an empty promise from yesteryear.