'He always wanted to get better, but he just couldn't get over it' 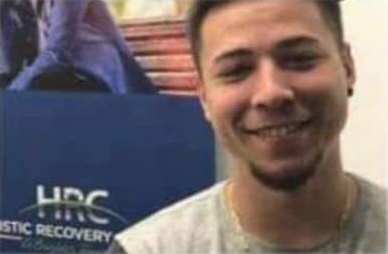 A picture of Ricco Chanthaphone after successfully completing a rehab stint in Florida several years ago. (Courtesy photo)

Sonja Soucy knows in her heart of hearts that her son wasn't trying to shoot a Rochester Police officer early Saturday morning when fleeing into the woods behind Saks Trailer Park.

"My son would never hurt anybody," Soucy said, choking back tears as she spoke about her son's final hours. "What I believe is he fired a shot to get a head start."

Ricco Chanthapho, an accomplished freestyle rapper who grew up in Rochester but courted a deadly addiction with heroin the past seven years, died on Monday at the age of 28 when his family opted to pull the plug on life support after realizing a self-inflicted gunshot wound had left him with no chance of living except in a vegetative state, his mom said.

Soucy, who now lives in Somersworth, said she didn't know what her son was thinking when he refused to pull over during an attempted traffic stop around 1:50 a.m. or when he ran from the officer into the woods, but she knows what led to it: his seven-year battle with heroin addiction.

She characterized it as a heroic seven-year battle, which began with his first rehab attempt facilitated by Kerry Norton, the founder and director of Rochester's Hope on Haven Hill.

There were many other rehab stints through the years, including in Laconia, Florida and most recently, at Plymouth House in Plymouth.

Soucy said when her son was in residential rehab he did great, coming out with newfound confidence and optimism.

"He always wanted to get better, but he just couldn't get over it," she said. "He'd have several months of good times and be drug free where he did the steps and the program, but it would never last for a long time."

As far as what happened on Saturday, when her son is said to have fired shots at the officer before running into the woods and forcing a standoff, Soucy says she is not disputing the circumstances, but this is all about the disease of addiction.

"This all stems from his addiction," she said. "Everything led him to how he would get his next fix."

As to why he may have shot himself instead of surrendering, she said he likely felt like he had no other options, but that there was one underlying certainty that trumped all others.

"My son touched many people lives," she said. "He was the most loving, generous ... he would do anything for anybody. He never meant to hurt anybody. Let's make this clear: this drug addiction made him what he was."

Ricco Chanthapho, who leaves behind a son, was a devout Buddhist, his mom said.

His funeral with Buddhist Monks will be held Monday from 1-5 p.m. at Purdy Memorial Chapel at 2 Concord Road in Lee.

In lieu of flowers, the family requests that donations be made by check to The Plymouth House Scholarship Fund, 446 Main St, Plymouth NH 03264.