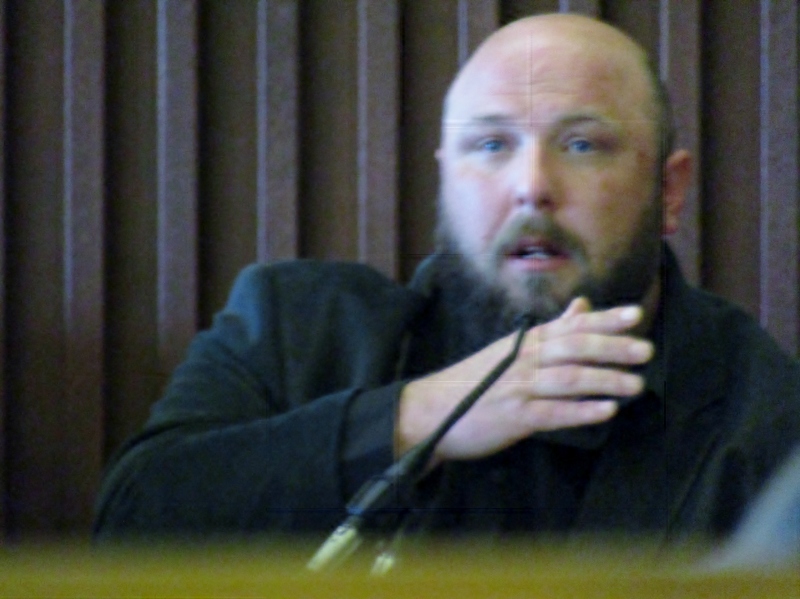 An emotional Joshua Colwell gestures on Friday during his testimony in the Timothy Verrill murder trial at Strafford County Superior Court in Dover. (Rochester Voice photos)

DOVER - The local man prosecutors say was the last to see Timothy Verrill before he killed two women in Farmington in 2017 testified during a marathon session on Friday that the accused murderer told him he thought one of them was an informant and he was going to the Farmington house where they were and set up surveillance cameras to prove it.

During a full day on the stand, Joshua Colwell testified under oath he was a co-conspirator in a drug enterprise with Verrill; their drug boss, Dean Smoronk; and Christine Sullivan, Smoronk's longtime girlfriend who was killed along with her friend, Jenna Pellegrini the morning of Jan. 27, 2017.

Verrill, 37, of Dover, is charged with first-degree murder in the deaths of Sullivan, 48, of 979 Meaderboro Road, Farmington, and Jenna Pellegrini, 32, of Barrington.

Colwell, who said he'd known Smoronk for several months, testified that on Thursday, Jan. 26, he was out having a few beers with a friend at several Dover bars when he got a text from Verrill around 10:40 p.m. that said: "Hey, bro," and then another around 12:15

Verrill likely wanted to buy some drugs, Colwell said, but when Verrill arrived he seemed extremely agitated, "spaced out" and convinced Pellegrini was a law enforcement informant.

"He seemed pretty off, like he was looking through me when he was talking at me," said Colwell.

"What did he say?" asked Assistant Attorney General Geoffrey Ward.

"He mentioned there was a woman up there at the house with Christine. He told me her name was Jenna ... and then he asked me if I thought she was an informant and I said 'I don't know.' He said something should be done about that."

Dean's house; talk to Dean about that stuff."

Colwell said he then watched as Verrill called Smoronk, who was down in southwest Florida, and told him his suspicions.

"When he got off the phone, what did he say Dean said," asked Ward.

"He said Dean said don't worry about it," Colwell replied.

Colwell testified that Verrill then told him he was going to go back to the house and set up some cameras. Colwell explained that there is an ap in which a smartphone can be turned into a surveillance camera from a location which can then be remotely surveilled.

Ward then pivoted testimony to later the morning of Jan. 27 when Verrill returned to Colwell's home a little before noon wearing a T-shirt and pants.

Colwell testified he thought that was odd (given the cold weather) as well as the fact that Verrill was coming in a direction that would suggest he was coming from the Meaderboro Road address rather than his own in Dover.

Colwell testified he was outside smoking a cigarette when Verrill pulled up, grabbed a beer out of his car and walked past him into Colwell's home and cryptically saying, "Interesting night."

Colwell said when he went inside to talk to Verrill, he asked him for a pair of pants. After he retrieved a pair of pants Colwell said Verrill put them on then asked for and drank a couple of shots of whiskey before asking for and smoking some marijuana.

"How was he acting?" Ward asked.

"Is he talking to you?" Ward continued.

"Yeah, I don't remember what he said, (but I said) If you did something stupid up there Dean's gonna be pissed."

Colwell said he didn't want to hear any more so he walked outside.

He said Verrill walked out soon after.

"He gave me a hug, said he loved me and had to tie up some loose ends," Colwell said, adding he never talked to him again.

"Worried about what went on up at the house," replied Colwell.

Ward then pivoted the testimony to later that Friday when Colwell said he passed Verrill heading toward Farmington when Colwell was headed south to the Rochester Home Depot to get some things for a door repair at his home.

Later, his suspicions aroused, he testified he drove with a friend to 979 Meaderboro Road where he saw Verrill's car parked where Sullivan normally parked.

Colwell testified the car he was in never entered the driveway, and that he left immediately feeling very "concerned."

Under questioning from Ward, Colwell continued that he then decided to make contact with Smoronk using an encrypted text message ap called "confide" that erases messages after they are read.

During a conversation on the ap he said Smoronk asked him how bad it was, 1-10, to which Colwell replied, "10."

"Based on how Tim was acting and my comment of 'if something stupid was done up there' and how he reacted to it," replied Colwell.

Ward's final pivot proved still more difficult for Colwell as he described how he picked up Smoronk at Logan Airport late that Saturday and drove him to Farmington where they discovered the blood-soaked mattress in the room where Pellegrini had been staying the last few days.

Colwell said they arrived at the Meaderboro Road house around 1 a.m.

"Tell us what happened," Ward said.

"We pull in and Dean jumps out and runs in the house, goes into the finished basement ... and said someone messed with his cameras.

"Then he goes up to the second level ... he went into the kitchen - nothing out of ordinary - then Dean went into bedroom and said "Oh God, no."

"What did you see?" asked Ward.

"Blood on the bed," answered Colwell faintly before putting his head down and openly weeping for nearly a half minute.

After Colwell composed himself after asking a bailiff for another cup of water, Ward asked, "Did you have anything to do with that?"

"With the blood on the bed?"

During Colwell's testimony Ward asked why his concerns for the women's safety never led to him calling police, himself.

Colwell said as a member of a motorcycle club they try to have no contact with police and if anybody was to send cops to the house, he wanted it to be Smoronk.

After several hours on the stand, Colwell was closely cross-examined by defense counsel Julia Nye, who established through testimony that he served as the former sergeant of arms for his motorcycle club back in 2017 and that part of his job was to enforce the rules of the club.

Under questioning from Nye Colwell also stated that Smoronk had attended a Jan. 21, 2017, motorcycle club party where members of two clubs had been in attendance.

Testimony from Colwell also reflected that Smoronk was interested in pursuing an affiliation with at least one of the clubs and Colwell in pursuit of the enhancement of his drug enterprise, and that part of Colwell's function was the collection of drug "debts."

And despite Colwell's assertion that he hadn't called police about his concerns regarding Sullivan's safety because he didn't want to get involved, Nye hammered him in that he had involved himself by giving Verrill a pair of pants, whiskey and marijuana that Friday just hours after he is accused of killing the women, calling Smoronk in Florida, going out to check the Meaderboro Road house after seeing Verrill driving north during the day on Jan. 27 and picking up Smoronk at Logan Airport around midnight on Jan. 28 to drive him home to Farmington.