'He said I'm stuck, I'm stuck, help me, then they ran over him again' 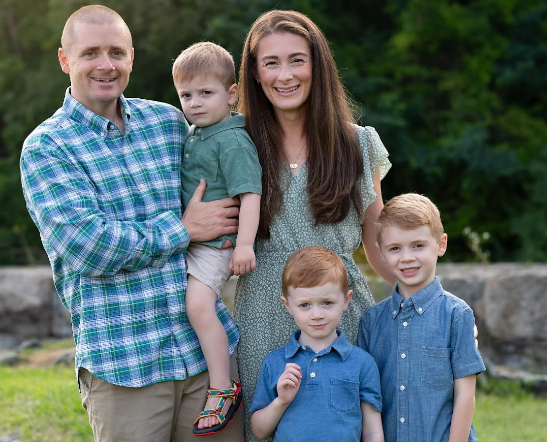 Mat and Nicole Lefebvre with their three sons (Courtesy/Facebook)

ROCHESTER - In a gut wrenching, cringe worthy interview on Thursday, the wife of a Rochester man severely injured by a hit and run driver on Monday detailed her husband's nightmare of being first struck by the vehicle, then run over, followed by a pause before being run over again by the rear wheel as the SUV fled the scene.

During the roughly 17-minute interview by WMUR's Jennifer Crompton, Nicole Lefebvre told of her husband's bravery, resilience and fortitude as he battled through his own personal pain and suffering to recount the details of his horrific encounter to help police advance their investigation in hopes of tracking a suspect.

Mat Lefebvre, 36, was jogging on North Main Street and going past McDuffee Street when the vehicle pulled out of McDuffee and struck him.

In the interview Nicole Lefebvre said her husband had seen the SUV slow down as it approached the stop sign and began to step into the road to cross in front of it when he heard the car speed up and was struck and knocked to the ground.

"He thought 'phew, that was a really hard hit ... and then he heard the gas again, and they ran him over and he tumbled as they were turning onto North Main Street. He was tumbling underneath the car,'" his wife recounted her husband telling her.

She said the car then stopped for several moments during which her husband composed himself amid the terror and began screaming for help.

Moments later the car sped away as he screamed, running over his back with its rear wheel and causing a spinal cord rupture that is his most severe injury.

Mat Lefebvre suffered two other spinal cord injuries, nine broken ribs, a broken sternum and clavicle, a punctured lung, nerve damage to his left side and a severe laceration that went from ear to ear on top of his head that took 25 staples to stop the bleeding, according to his wife, who added there is no way the driver didn't know they'd hit someone.

Rochester Police said on Thursday they continue to investigate the accident, which involved what is thought to be an older model, blue or black SUV.

Nicole Lefebvre said her husband believes the only damage that may be visible is in the lower grill area in the area of where fog lights might be.

To contribute to a Go Fund Me campaign that has already raised almost $38,000 from more than 400 contributors click here.