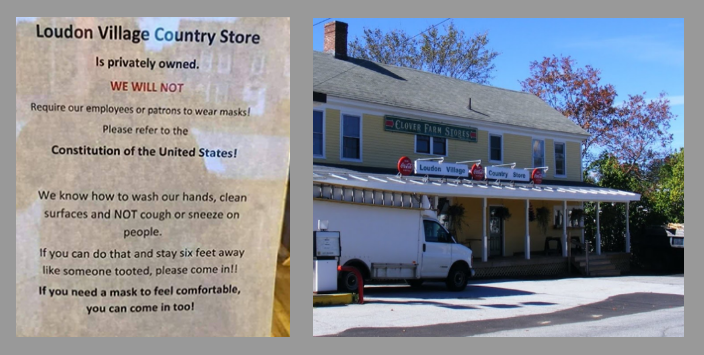 The Loudon Village Country Store not only ignored the COVID orders, they defied them with a sign on their front door. (Courtesy photos)

CONCORD - The state of New Hampshire on Wednesday slapped heavy fines on a Loudon country store and a Lincoln tavern bringing the number of Granite State businesses issued civil penalties over COVID-related infractions to five.

Dan and Dawn Plourde, the owners of Loudon Village Country Store, drew the stiffest penalty, a $2,000 fine, for not requiring their employees to wear masks. The Plourdes also posted a sign on the store's front door that openly defied COVID guidelines, stating that the Constitution of the United States does not allow such intrusion by the government. As of Tuesday the sign was still there, according to the summary judgment letter written by Associate Attorney General Anne M. Edwards.

The letter also stated that Loudon Fire Chief Tom Blanchette had spoken to the Plourdes 10 times regarding the need for employees to wear masks.

The other fine was levied against White Mountain Tavern in Lincoln and principal David Culhane.

Similar to the Loudon Village Country Store, the White Mountain Tavern was cited for employees and patrons in common areas not wearing masks and not ensuring social distancing protocols.

They were also found to be in violation of the Governor's Emergency Orders. The White Mountain Tavern was fined $1,000.

Grumpy's Bar and Grill of Plaistow was fined $1,500 for mask and social distancing violations on Tuesday. Simply Delicious Baking Co. of Bedford, Checkmate Pizza of Manchester and What a Bagel of Weare were all fined $500 apiece a week ago, all for similar infractions