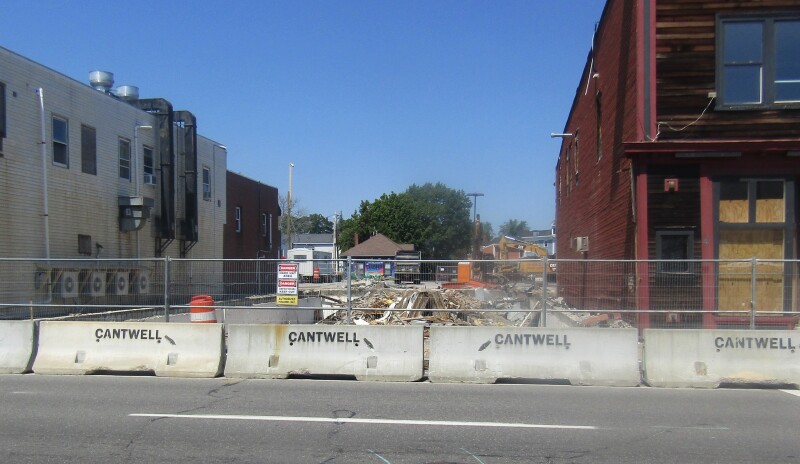 Sometime today Slim's will be taken down to make way for an apartment building with a first-floor restaruant. (Rochester Voice photos)

ROCHESTER - What may be Rochester's oldest downtown restaurant and bar faces the wrecking ball today, just days after its neighbor faced the same fate.
The former Publick House, Slim's, Roaring 20s, and most recently short-lived Laughing Duck, will be taken down by a crew of three men from Cantwell Construction of Dover.
The building, which was built in the 1870s, has always been a saloon and restaurant and featured a second floor back porch.
Earlier this week the former Hoffman furniture building next door was torn down.
The two buildings will be replaced with an $11.7 million commercial/residential building on the site built by GP Properties of Charlestown, Mass., which paid more than a half million dollars for both buildings.

The building will comprise a restaurant on the bottom floor 45 apartments on the four upper floors, including 6 two-bedroom, two-bath and nine one-bedroom, one-bath units.
Average rents including both one- and two-bedroom units are expected to be around $1,800 a month.
The city's 79E tax relief program, which in this case allows the developer to avoid paying more than the current assessed value for seven years, sealed the deal.

The demo crew, working in near 100 degree heat on Thursday, said they'd be done taking the building down today, but would be around for a week doing debris removal.