How do you dispose of a used syringe? Best advice is to call the police 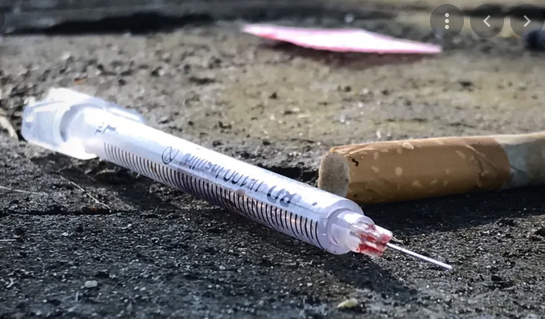 About a half million used syringes are found throughout the Granite State every year. (Courtesy photo)

ROCHESTER - A regular part of any Rochester patrol officer's job is to respond to calls to come get a used syringe found somewhere in the city.

And they're good with that.

"If you don't feel safe disposing of it yourself please call us," Rochester Police Capt. Todd Pinkham said. "We'd much rather take the time to take care of it then have someone cause themselves serious harm."

While the exact amount of "found" syringes throughout New Hampshire every year is unclear, about a half million used needles are collected directly from drug users at safe disposal sites, according to Palana Hunt-Hawkins, a Rochester city councilor and outreach advocate for the drug using community.

Hunt-Hawkins said she and others often go into the woods to visit homeless encampments and spread the word about safe drug use.

"If they're using we want them to do it safely, and a big part of that is that they don't reuse needles," she said. "We know that some do."

The New Hampshire Harm Reduction Coalition is a nonprofit whose mission is is to enhance "provider skill in serving people who actively use substances."

Hunt-Hawkins said the organization takes extensive data while implementing their syringe service programs, which seek to exchange used needles for clean ones with anyone using drugs.

She advises that everyone should take great caution in any attempt to dispose of a found syringe. themselves.

"You want to use gloves and a grabber," she said. "Then using the grabber place it in a heavy plastic laundry detergent container."

She said sometimes drug users desperate for a fix will use a dirty syringe, which can result in a myriad of serious health consequences like contracting hepatitis C.

She advised any user in that predicament to at least clean the syringe with bleach and then rinse and cleanse it thoroughly with water.

Pinkham advises that if you do come upon a used syringe, be it on a city street or the Common or anywhere else, just call police. They have syringe collection tubes in every cruiser and at the police station.