'I came here and the first week was great ... then COVID hit' 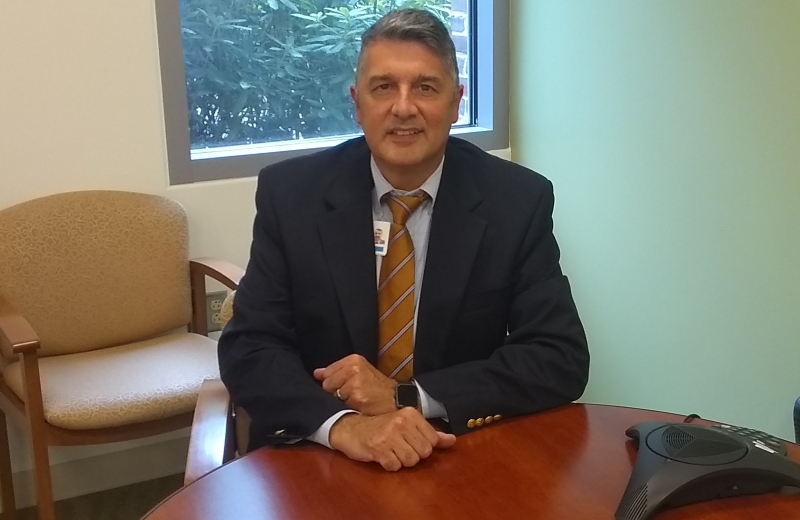 ROCHESTER - Six months ago Jeff Scionti took on the challenge of a lifetime, guiding Frisbie Memorial Hospital from its proud century-old origins as a local nonprofit to a new vision as part of a health care giant.

Scionti told The Rochester Voice that by the time of his arrival he had already met with members of Frisbie's transition team and had "made a nice connection" with them.

"I came here and the first week was great," he said on Wednesday during an interview in his Frisbie office. "Then COVID hit."

After 34 years at Parkland Medical Center in Derry, including nine as COO and four as CEO, Scionti had encountered a myriad of challenges but this was different, he said.

"People couldn't be here, with boots on the ground due to the virus," Frisbie's CEO since March said. "The big challenge was in IT, to make all connectivity (with HCA) seamless."

But while transition amid the pandemic was formidable, it was also fortuitous, Scionti added, because now Frisbie was enjoying broad support from a sophisticated 180-hospital health care system.

But even with the support of HCA a daunting task still lay ahead.

"The biggest challenge was having the time for preparation, to make sure everyone was educated (about the virus) and that we had the proper PPE for every employee, Scionti said. "And with CDC making changes continuously, we had to make sure staff was on top of that to keep up."

He said thankfully Rochester and Frisbie did not see very many COVID-19 cases, which he attributes to the relatively low amount of folks commuting into Boston.

But not being hit hard had its own challenges.

"We had to ensure everyone was staying vigilant with wearing PPE even though we didn't have (COVID) problems," he said.

Asked about the reports of PPE shortages, he acknowledged there were supply line issues.

"There was a shortage, it was hard to get," he said, "but we always had enough for patients; it was always there just in time."

With virus issues hopefully in the past, Scionti said the big focus at the hospital now is expanding its outpatient mental health program.

He said they already have such a program for geropsych patients - over 55 - but they would like to expand it for adults under 55 as well.

"We have nothing for nongeropsych, so we'd like to get that started soon," Scionti said, "We won't have inpatient, but can have IOP (intensive outpatient), which is where they would spend up to eight hours a day at the hospital. We're looking to add more complementary services to help these patients."

Scionti, who lives with his wife in Newburyport, Mass., said their favorite thing do is dine out, so the pandemic put a crimp in that for a while but now they're easing back into their favorite pastime.

He also has two grown daughters who are also in health care, one who works in the ultrasound unit at Portsmouth Regional Hospital; and one now working at Parkland as a mental health tech who is about to take her nursing exam, he says, looking upward.

"Both got engaged a month and a half ago at the same time, so that's going to affect my retirement plans," he quips. "I've asked them to stagger their weddings."

All in all, he said the last six months have been a challenge, but being a part of the Frisbie family has also made it a blessing.

"Being at Parkland for 33 years, this was a big change for me," he said. "But the staff here are incredible; the culture, the warmth, the reception that I got when I came here. It was heartfelt and made me realize I made a great decision to come here.

"This staff is dedicated; there's a lot of longevity here with staff, and I can understand why."