''I heard and felt a crack and cried out in pain' 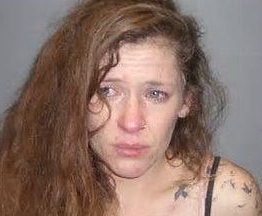 A Dover Police Officer's wife charged with assaulting him earlier this month has filed her own Domestic Violence Petition that accuses her husband of breaking her ribs when he "forcefully fell with his elbow into my left ribcage."

In the petition, Sarah Letendres, 34, of Second Street, Rollinsford, said when he fell on her, "I heard and felt a crack and cried out in pain."
R.J. Letendres, 47, who has been a police officer in Dover for 13 years, has not been charged and is currently on paid administrative leave pending an internal investigation by Dover Police.

Meanwhile, the DV case against Sarah Letendres, has been moved to Merrimack County Superior Court. No charges have been filed against her husband, who remains on paid leave.

The Rochester Voice obtained the paperwork regarding the case from the New Hampshire court system.

Rollinsford Police responded to the couple's home on July 10 after R.J. Letendres called to report he'd been assaulted by his wife.

An affidavit written by Rollinsford Police Sgt. William Hancock stated the altercation was reported to have unfolded as R.J. Letendres began talking about getting a divorce.

"After this conversation Sarah became upset, grabbed Ronald's bag with stuff in it and put it behind her car tire," the affidavit states. "He (RJ) explained to (the officer) that she was outside for a short period of time when he started calling police for a welfare check on Sarah."

The affidavit notes that R.J. Letendres reported that when his wife returned and saw him on the phone with police she attacked him to get the phone. He told police he had to "restrain her and pushed her to the ground where the phone got knocked out of her hand." He said he then called 911.

Sarah Letendres was also charged with obstructing a report of crime, resisting arrest, reckless conduct, disobeying an officer and breach of bail conditions, the latter charges all stemming from her refusing to obey police during a Rollinsford traffic stop in the early morning hours of July 11.

Medical records posted online by her family members show she had suffered four closed fractures to the left side of her ribcage.

On Thursday both parties agreed to a cooling off period with mutually agreed upon terms for child visitations and no-contact orders.