If city leaders are so arrogant with the press, why should citizens expect more? 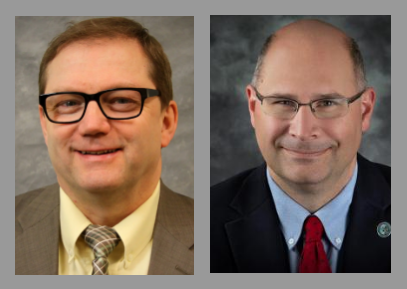 From left, Rochester City Manager Blaine Cox, Economic Development Director Mike Scala (Courtesy photos)
To the editor:
New Hamnpshire State Representative and Rochester resident Cliff Newton as well as the Rochester Voice asked pertinent questions of the Rochester City Council, about how our tax dollars are accounted for. Seems "MUM's" the word to both.

Rochester City Manager Blaine Cox said The Rochester Voice is not a legitimate news source, and he needn't reply to its queries. Publicly disparaging the "VOICE" for not being a "Valid" news source, is appalling. Was this comment picked up, and reported in Fosters Daily Democrat? Did Fosters require the Gauntlet of Advertising supporters to "couch" their approval first?
Thanks go out to Rochester's Economic Development Director Mike Scala for pointing out The Rochester Voice has a "readership of 5."
Much to my chagrin, I'm one of those 5.
It was revealed at a Council Meeting that accepting Federal/State funds are, that, if they (Rochester) doesn't accept the money, someone else will. (On Video)
Right there, ANY taxpayer in the State has a valid right to an answer.
Taxpayers, now there's no need wonder why no one goes to City Council Meetings.
If they won't acknowledge them, they won't even consider you.
Simply being publicly scoffed at at a meeting would be an improvement.
- Lou Archambault,
Rochester NH
Read more from:
opinion
Tags:
None
Share: